Age spots are small, flat dark areas on the skin. They vary in size and usually appear on areas exposed to the sun, such as the face, hands, shoulders and arms. Age spots are also called sunspots, liver spots and solar lentigines.

Age spots are very common in adults older than 50, but younger people can get them if they spend time in the sun.

Age spots can look like cancerous growths. True age spots don't need treatment, but they are a sign the skin has received a lot of sun exposure and are an attempt by your skin to protect itself from more sun damage. For cosmetic reasons, they can be lightened or removed.

You can help prevent age spots by regularly using sunscreen and avoiding the sun. 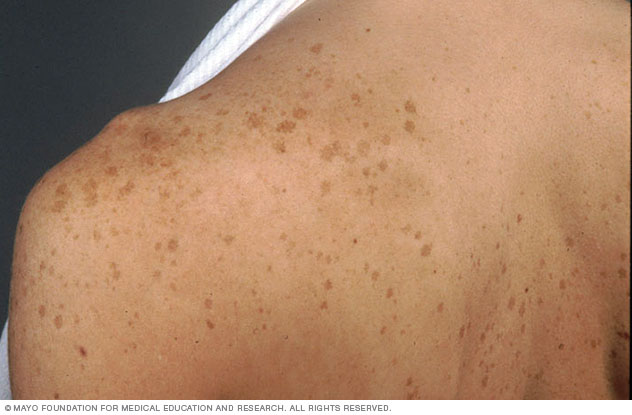 Age spots may affect people of all skin types, but they're more common in adults with light skin. Unlike freckles, which are common in children and fade with no sun exposure, age spots don't fade.

Age spots don't require medical care. Have your doctor look at spots that are black or have changed in appearance. These changes can be signs of melanoma, a serious form of skin cancer.

It's best to have any new skin changes evaluated by a doctor, especially if a spot: 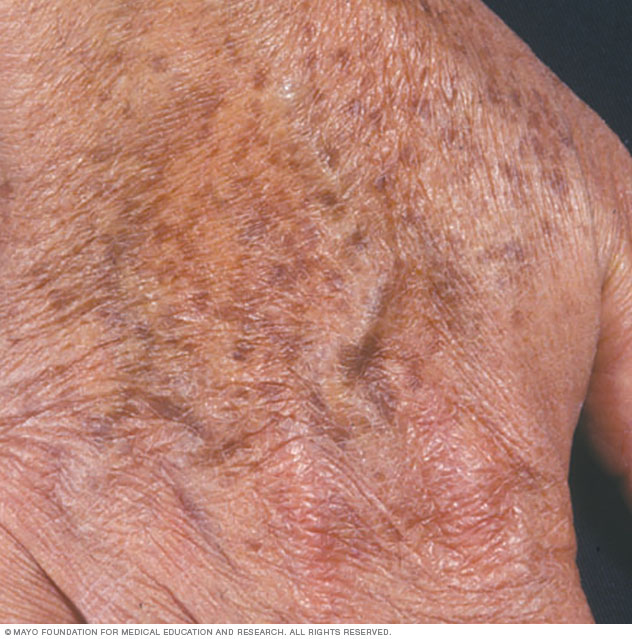 Age spots are caused by overactive pigment cells. Ultraviolet (UV) light speeds up the production of melanin, a natural pigment that gives skin its color. On skin that has had years of sun exposure, age spots appear when melanin becomes clumped or is produced in high concentrations.

Use of commercial tanning lamps and beds also can cause age spots.

You might be more likely to develop age spots if you:

To help avoid age spots and new spots after treatment, follow these tips for limiting your sun exposure:

If you want your age spots to be less noticeable, treatments are available to lighten or remove them. Because the pigment is located at the base of the epidermis — the topmost layer of skin — any treatments meant to lighten the age spots must penetrate this layer of skin.

The age spot therapies that remove skin are usually done in a doctor's office and don't require hospitalization. The length of each procedure and the time it takes to see results varies from weeks to months.

After treatment, when outdoors you'll need to use a broad-spectrum sunscreen with a sun protection factor (SPF) of at least 30 and wear protective clothing.

Because age spot treatments are considered cosmetic, they typically aren't covered by insurance. And because the procedures can have side effects, discuss your options carefully with a doctor who specializes in skin conditions (dermatologist). Also, make sure your dermatologist is specially trained and experienced in the technique you're considering.

Many nonprescription fade creams and lotions for lightening age spots are available for sale. These may improve the appearance of age spots, depending on how dark the spots are and how often you apply the cream. You might need to use such a product regularly for several weeks or months before you notice results.

You're likely to start by seeing your primary care doctor, who may then refer you to a dermatologist.

Questions you may want to ask your doctor include: