Appendicitis is an inflammation of the appendix, a finger-shaped pouch that projects from your colon on the lower right side of your abdomen.

Appendicitis causes pain in your lower right abdomen. However, in most people, pain begins around the navel and then moves. As inflammation worsens, appendicitis pain typically increases and eventually becomes severe.

Although anyone can develop appendicitis, most often it occurs in people between the ages of 10 and 30. Standard treatment is surgical removal of the appendix. 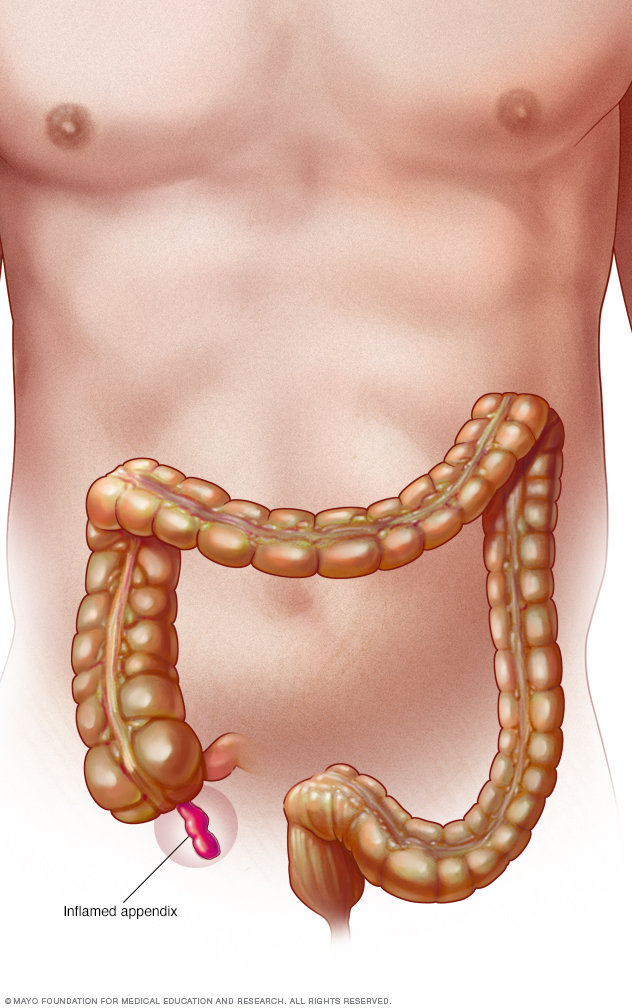 Signs and symptoms of appendicitis may include:

The site of your pain may vary, depending on your age and the position of your appendix. When you're pregnant, the pain may seem to come from your upper abdomen because your appendix is higher during pregnancy.

Make an appointment with a doctor if you or your child has worrisome signs or symptoms. Severe abdominal pain requires immediate medical attention.

A blockage in the lining of the appendix that results in infection is the likely cause of appendicitis. The bacteria multiply rapidly, causing the appendix to become inflamed, swollen and filled with pus. If not treated promptly, the appendix can rupture.

Appendicitis can cause serious complications, such as:

To help diagnose appendicitis, your doctor will likely take a history of your signs and symptoms and examine your abdomen.

Tests and procedures used to diagnose appendicitis include:

Appendicitis treatment usually involves surgery to remove the inflamed appendix. Before surgery you may be given a dose of antibiotics to treat infection.

Surgery to remove the appendix (appendectomy)

Appendectomy can be performed as open surgery using one abdominal incision about 2 to 4 inches (5 to 10 centimeters) long (laparotomy). Or the surgery can be done through a few small abdominal incisions (laparoscopic surgery). During a laparoscopic appendectomy, the surgeon inserts special surgical tools and a video camera into your abdomen to remove your appendix.

In general, laparoscopic surgery allows you to recover faster and heal with less pain and scarring. It may be better for older adults and people with obesity.

But laparoscopic surgery isn't appropriate for everyone. If your appendix has ruptured and infection has spread beyond the appendix or you have an abscess, you may need an open appendectomy, which allows your surgeon to clean the abdominal cavity.

Expect to spend one or two days in the hospital after your appendectomy.

Draining an abscess before appendix surgery

If your appendix has burst and an abscess has formed around it, the abscess may be drained by placing a tube through your skin into the abscess. Appendectomy can be performed several weeks later after controlling the infection.

Expect a few weeks of recovery from an appendectomy, or longer if your appendix burst. To help your body heal:

Your doctor will prescribe medications to help you control your pain after your appendectomy. Some complementary and alternative treatments, when used with your medications, can help control pain. Ask your doctor about safe options, such as:

Make an appointment with your family doctor if you have abdominal pain. If you have appendicitis, you'll likely be hospitalized and referred to a surgeon to remove your appendix.

Take a family member or friend along, if possible, to help you remember the information you're given.

For appendicitis, some basic questions to ask your doctor include: