Asthma is a condition in which your airways narrow and swell and may produce extra mucus. This can make breathing difficult and trigger coughing, a whistling sound (wheezing) when you breathe out and shortness of breath.

For some people, asthma is a minor nuisance. For others, it can be a major problem that interferes with daily activities and may lead to a life-threatening asthma attack.

Asthma can't be cured, but its symptoms can be controlled. Because asthma often changes over time, it's important that you work with your doctor to track your signs and symptoms and adjust your treatment as needed. 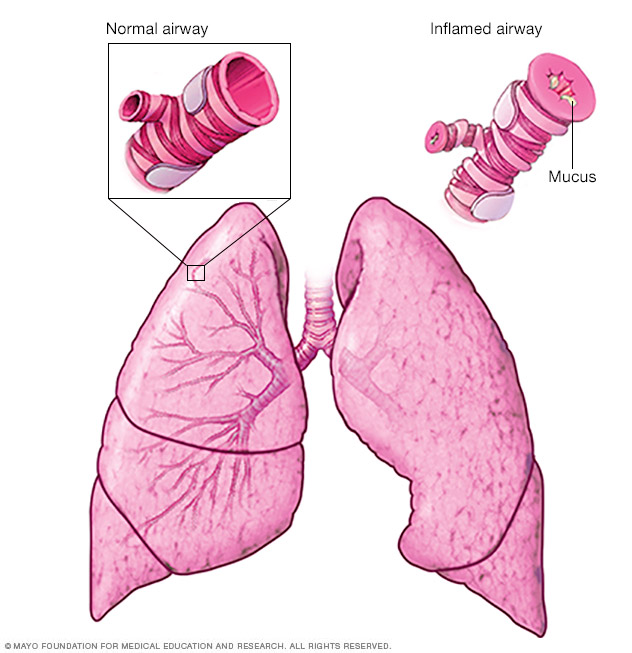 Asthma symptoms vary from person to person. You may have infrequent asthma attacks, have symptoms only at certain times — such as when exercising — or have symptoms all the time.

Asthma signs and symptoms include:

Signs that your asthma is probably worsening include:

For some people, asthma signs and symptoms flare up in certain situations:

Severe asthma attacks can be life-threatening. Work with your doctor to determine what to do when your signs and symptoms worsen — and when you need emergency treatment. Signs of an asthma emergency include:

It isn't clear why some people get asthma and others don't, but it's probably due to a combination of environmental and inherited (genetic) factors.

Exposure to various irritants and substances that trigger allergies (allergens) can trigger signs and symptoms of asthma. Asthma triggers are different from person to person and can include:

A number of factors are thought to increase your chances of developing asthma. They include:

Proper treatment makes a big difference in preventing both short-term and long-term complications caused by asthma.

While there's no way to prevent asthma, you and your doctor can design a step-by-step plan for living with your condition and preventing asthma attacks.

Your doctor will perform a physical exam to rule out other possible conditions, such as a respiratory infection or chronic obstructive pulmonary disease (COPD). Your doctor will also ask you questions about your signs and symptoms and about any other health problems.

You may be given lung function tests to determine how much air moves in and out as you breathe. These tests may include:

Lung function tests often are done before and after taking a medication to open your airways called a bronchodilator (brong-koh-DIE-lay-tur), such as albuterol. If your lung function improves with use of a bronchodilator, it's likely you have asthma.

Other tests to diagnose asthma include:

How asthma is classified

To classify your asthma severity, your doctor will consider how often you have signs and symptoms and how severe they are. Your doctor will also consider the results of your physical exam and diagnostic tests.

Prevention and long-term control are key to stopping asthma attacks before they start. Treatment usually involves learning to recognize your triggers, taking steps to avoid triggers and tracking your breathing to make sure your medications are keeping symptoms under control. In case of an asthma flare-up, you may need to use a quick-relief inhaler.

The right medications for you depend on a number of things — your age, symptoms, asthma triggers and what works best to keep your asthma under control.

Preventive, long-term control medications reduce the swelling (inflammation) in your airways that leads to symptoms. Quick-relief inhalers (bronchodilators) quickly open swollen airways that are limiting breathing. In some cases, allergy medications are necessary.

Quick-relief (rescue) medications are used as needed for rapid, short-term symptom relief during an asthma attack. They may also be used before exercise if your doctor recommends it. Types of quick-relief medications include:

Keep a record of how many puffs you use each week. If you need to use your quick-relief inhaler more often than your doctor recommends, see your doctor. You probably need to adjust your long-term control medication.

Allergy medications may help if your asthma is triggered or worsened by allergies. These include:

This treatment is used for severe asthma that doesn't improve with inhaled corticosteroids or other long-term asthma medications. It isn't widely available nor right for everyone.

During bronchial thermoplasty, your doctor heats the insides of the airways in the lungs with an electrode. The heat reduces the smooth muscle inside the airways. This limits the ability of the airways to tighten, making breathing easier and possibly reducing asthma attacks. The therapy is generally done over three outpatient visits.

Treat by severity for better control: A stepwise approach

Work with your doctor to create an asthma action plan that outlines in writing when to take certain medications or when to increase or decrease the dose of your medications based on your symptoms. Also include a list of your triggers and the steps you need to take to avoid them.

Your doctor may also recommend tracking your asthma symptoms or using a peak flow meter on a regular basis to monitor how well your treatment is controlling your asthma.

Although many people with asthma rely on medications to prevent and relieve symptoms, you can do several things on your own to maintain your health and lessen the possibility of asthma attacks.

Taking care of yourself can help keep your symptoms under control, including:

Certain alternative treatments may help with asthma symptoms. However, keep in mind that these treatments are not a replacement for medical treatment, especially if you have severe asthma. Talk to your doctor before taking any herbs or supplements, as some may interact with the medications you take.

In most cases, more research is needed to see how well alternative remedies work and to measure the extent of possible side effects. Alternative asthma treatments include:

Asthma can be challenging and stressful. You may sometimes become frustrated, angry or depressed because you need to cut back on your usual activities to avoid environmental triggers. You may also feel limited or embarrassed by the symptoms of the disease and by complicated management routines.

But asthma doesn't have to be a limiting condition. The best way to overcome anxiety and a feeling of helplessness is to understand your condition and take control of your treatment. Here are some suggestions that may help:

You're likely to start by seeing your family doctor or a general practitioner. However, when you call to set up an appointment, you may be referred to an allergist or a pulmonologist.

Because appointments can be brief, and because there's often a lot of ground to cover, it's a good idea to be well prepared. Here's some information to help you get ready for your appointment, as well as what to expect from your doctor.

These steps can help you make the most of your appointment:

Your time with your doctor is limited, so preparing a list of questions will help you make the most of your time together. List your questions from most important to least important in case time runs out. For asthma, some basic questions to ask your doctor include:

Your doctor is likely to ask you a number of questions. Being ready to answer them may reserve time to go over any points you want to spend more time on. Your doctor may ask: