Benign paroxysmal positional vertigo (BPPV) is one of the most common causes of vertigo — the sudden sensation that you're spinning or that the inside of your head is spinning.

BPPV causes brief episodes of mild to intense dizziness. It is usually triggered by specific changes in your head's position. This might occur when you tip your head up or down, when you lie down, or when you turn over or sit up in bed.

Although BPPV can be bothersome, it's rarely serious except when it increases the chance of falls. You can receive effective treatment for BPPV during a doctor's office visit.

The signs and symptoms of benign paroxysmal positional vertigo (BPPV) may include:

The signs and symptoms of BPPV can come and go and commonly last less than one minute. Episodes of BPPV can disappear for some time and then recur.

Activities that bring about the signs and symptoms of BPPV can vary from person to person, but are almost always brought on by a change in head position. Some people also feel out of balance when standing or walking.

Generally, see your doctor if you experience any recurrent, sudden, severe, or prolonged and unexplained dizziness or vertigo.

Although it's uncommon for dizziness to signal a serious illness, see your doctor immediately if you experience dizziness or vertigo along with any of the following:

The signs and symptoms listed above may signal a more serious problem.

Often, there's no known cause for BPPV. This is called idiopathic BPPV.

When there is a known cause, BPPV is often associated with a minor to severe blow to your head. Less common causes of BPPV include disorders that damage your inner ear or, rarely, damage that occurs during ear surgery or long periods positioned on your back, such as in a dentist chair. BPPV also has been associated with migraines.

Inside your ear is a tiny organ called the vestibular labyrinth. It includes three loop-shaped structures (semicircular canals) that contain fluid and fine, hairlike sensors that monitor your head's rotation. 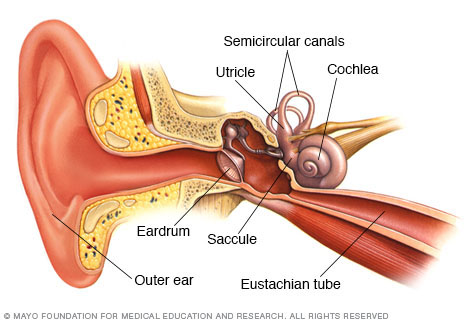 Benign paroxysmal positional vertigo occurs most often in people age 50 and older, but can occur at any age. BPPV is also more common in women than in men. A head injury or any other disorder of the balance organs of your ear may make you more susceptible to BPPV.

Although BPPV is uncomfortable, it rarely causes complications. The dizziness of BPPV can make you unsteady, which may put you at greater risk of falling.

Your doctor may do a series of tests to determine the cause of your dizziness. During a physical exam, your doctor will likely look for:

If your doctor can't find the cause of your signs and symptoms, he or she may order additional testing, such as:

Benign paroxysmal positional vertigo may go away on its own within a few weeks or months. But, to help relieve BPPV sooner, your doctor, audiologist or physical therapist may treat you with a series of movements known as the canalith repositioning procedure.

Performed in your doctor's office, the canalith repositioning procedure consists of several simple and slow maneuvers for positioning your head. The goal is to move particles from the fluid-filled semicircular canals of your inner ear into a tiny baglike open area (vestibule) that houses one of the otolith organs in your ear, where these particles don't cause trouble and are more easily resorbed.

Each position is held for about 30 seconds after any symptoms or abnormal eye movements stop. This procedure usually works after one or two treatments.

Your doctor will likely teach you how to perform the procedure on yourself so that you can do it at home if needed.

In rare situations when the canalith repositioning procedure doesn't work, your doctor may recommend a surgical procedure. In this procedure, a bone plug is used to block the portion of your inner ear that's causing dizziness. The plug prevents the semicircular canal in your ear from being able to respond to particle movements or head movements in general. The success rate for canal plugging surgery is about 90%.

If you experience dizziness associated with BPPV, consider these tips:

BPPV may recur even after successful therapy. Although there's no cure, the condition can be managed with physical therapy and home treatments.

Make an appointment with your doctor if you have symptoms common to BPPV. After an initial examination, your doctor may refer you to an ear, nose and throat (ENT) specialist or a doctor who specializes in the brain and nervous system (neurologist).

Questions to ask the doctor at the initial appointment include:

Questions to ask if you are referred to a specialist include:

A doctor who sees you for symptoms common to BPPV may ask a number of questions, such as: