A brain arteriovenous malformation (AVM) is a tangle of blood vessels that connects arteries and veins in the brain.

The arteries take oxygen-rich blood from the heart to the brain. Veins carry the oxygen-depleted blood back to the lungs and heart. A brain AVM disrupts this vital process.

An arteriovenous malformation can develop anywhere in the body but common locations include the brain and spinal cord — though overall, brain AVMs are rare.

The cause of brain AVMs isn't clear. Most people are born with them, but they can form later in life. Rarely, they can be passed down among families.

Some people with a brain AVM experience signs and symptoms, such as headaches or seizures. An AVM is often found after a brain scan for another health issue or after the blood vessels rupture and bleed (hemorrhage).

Once diagnosed, a brain AVM can be treated to prevent complications, such as brain damage or stroke. 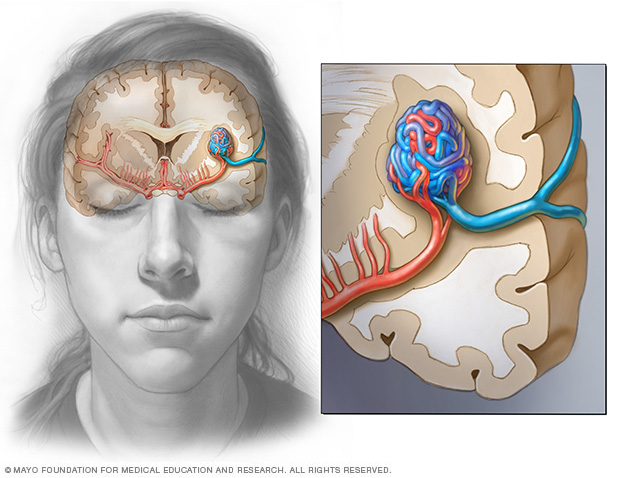 AVM, blood passes directly from the arteries to the veins via tangled vessels. This disrupts the typical process of how blood circulates through the brain." />

A brain arteriovenous malformation may not cause any signs or symptoms until the AVM ruptures, resulting in hemorrhage. In about half of all brain AVMs, hemorrhage is the first sign.

But some people with brain AVM may experience signs and symptoms other than bleeding, such as:

Some people may experience more-serious neurological signs and symptoms, depending on the location of the AVM, including:

Signs and symptoms of a brain AVM may begin at any age but usually emerge between ages 10 and 40. Brain AVMs can damage brain tissue over time. The effects slowly build and often cause symptoms in early adulthood.

By middle age, however, brain AVMs tend to remain stable and are less likely to cause symptoms.

Research hasn't found that pregnancy increases the risk of hemorrhage for people with a brain AVM. However, more research needs to be done.

One severe type of brain AVM involves the vein of Galen. It causes signs and symptoms that emerge soon or immediately after birth. The major blood vessel involved in this type of brain AVM can cause fluid to build up in the brain and the head to swell. It can also cause swollen veins that are visible on the scalp, seizures, failure to thrive and congestive heart failure.

The cause of brain AVM is unknown. Researchers believe most brain AVMs are present at birth and form during fetal development, but brain AVMs can develop later in life, as well. Brain AVMs are seen in some people who have hereditary hemorrhagic telangiectasia (HHT), also known as Osler-Weber-Rendu syndrome. HHT affects the way blood vessels form in several areas of the body, including the brain.

Typically, the heart sends oxygen-rich blood to the brain through arteries. The arteries slow blood flow by passing it through a series of progressively smaller networks of blood vessels, ending with the smallest blood vessels (capillaries). The capillaries slowly deliver oxygen through their thin, porous walls to the surrounding brain tissue.

The oxygen-depleted blood passes into small blood vessels and then into larger veins that return the blood to the heart and lungs to get more oxygen.

The arteries and veins in an AVM lack this supporting network of smaller blood vessels and capillaries. Instead, blood flows quickly and directly from the arteries to the veins, bypassing the surrounding tissues.

Anyone can be born with a brain AVM, but these factors may raise the risk:

Complications of a brain AVM include: 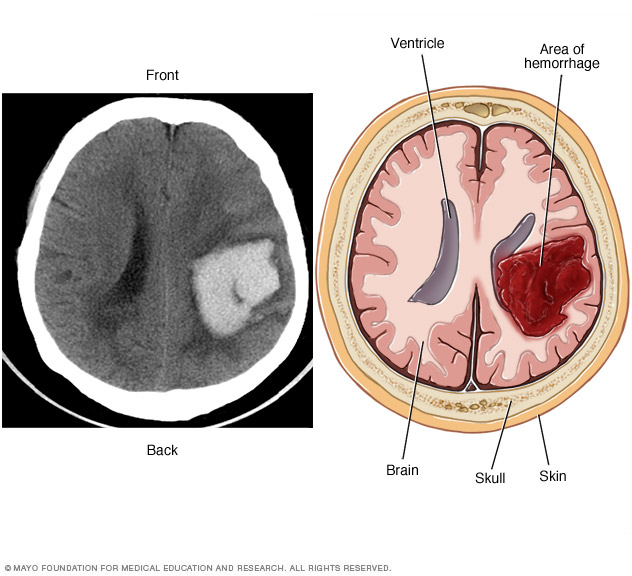 AVM may cause bleeding in the brain (hemorrhage), which can damage the surrounding brain tissue, as shown by this CT scan (left) and illustration (right) of an intracerebral hemorrhage." />

To diagnose a brain AVM, your health care provider will review your symptoms and conduct a physical exam. 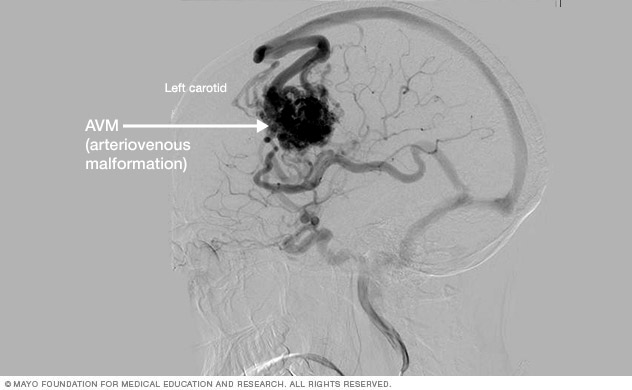 There are several potential treatment options for brain AVM. The main goal of treatment is to prevent hemorrhage, but treatment to control seizures or other neurological complications also may be considered.

The most appropriate treatment for your condition depends on your age, health, and the size and location of the brain AVM.

Medications may be used to treat symptoms caused by the AVM, such as headaches or seizures.

Surgery is the most common treatment for brain AVMs. There are three surgical options:

If you have few or no symptoms or if your AVM is in an area of your brain that's hard to treat, your health care provider may decide to monitor your condition with regular checkups.

Researchers are currently studying ways to better predict the risk of hemorrhage in people with brain AVM to better guide treatment decisions. For example, high blood pressure within the AVM and hereditary syndromes associated with neurological issues may play a role.

Innovations in imaging technology — such as 3D imaging, brain tract mapping and functional imaging, which produces images of blood flow to certain areas of the brain — also are being evaluated. The techniques have the potential to improve surgical precision and safety in removing brain AVMs and preserving surrounding vessels. 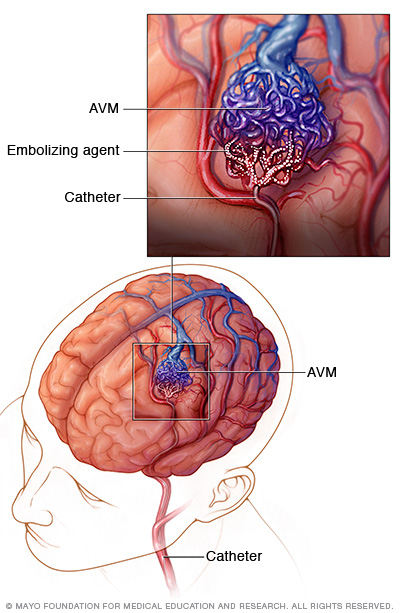 AVM and injects an embolizing agent, such as small particles or a glue-like substance, to block the artery and reduce blood flow into the AVM." />

You can take steps to cope with the emotions that may come with a diagnosis of brain AVM and the recovery process. Consider trying to:

Ask your health care provider about support groups in your area. Or look online, check the phone book, library or a national organization, such as the American Stroke Association or the Aneurysm and AVM Foundation.

A brain AVM may be diagnosed in an emergency immediately after bleeding has occurred. It may also be detected after other symptoms prompt a brain scan.

But in some cases, a brain AVM may be found during diagnosis or treatment of an unrelated medical condition. You may then be referred to a specialist trained in brain and nervous system conditions (neurologist or neurosurgeon).

Your appointment time is limited, so preparing a list of questions ahead of time will help you make the most of your time together. For brain AVM, some basic questions to ask include:

Your neurologist is likely to ask about any symptoms you may be experiencing, conduct a physical exam and schedule tests to confirm the diagnosis.

The tests gather information about the size and location of the AVM to help direct your treatment options. Your neurologist may ask:

Avoid any activity that may raise your blood pressure and put strain on a brain AVM, such as heavy lifting or straining. Also avoid taking any blood-thinning medications, such as warfarin (Jantovin).