Bullous pemphigoid (BUL-us PEM-fih-goid) is a rare skin condition that causes large, fluid-filled blisters. They develop on areas of skin that often flex — such as the lower abdomen, upper thighs or armpits. Bullous pemphigoid is most common in older adults.

Bullous pemphigoid occurs when your immune system attacks a thin layer of tissue below your outer layer of skin. The reason for this abnormal immune response is unknown, although it sometimes can be triggered by taking certain medications.

Bullous pemphigoid often goes away on its own in a few months, but may take as many as five years to resolve. Treatment usually helps heal the blisters and ease any itching. It may include corticosteroid medications, such as prednisone, and other drugs that suppress the immune system. Bullous pemphigoid can be life-threatening, especially for older people who are already in poor health. 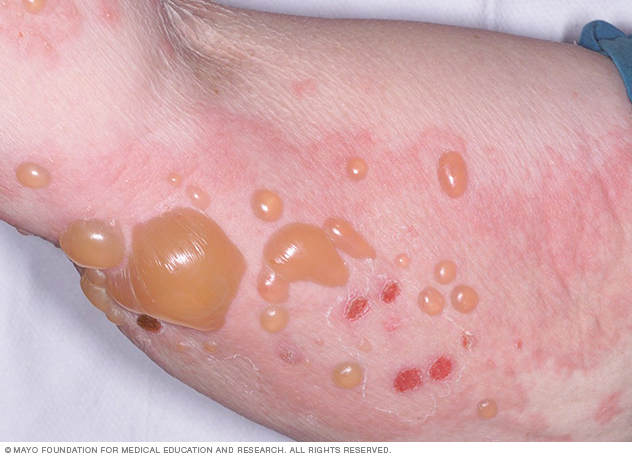 The signs and symptoms of bullous pemphigoid may include:

See your doctor if you develop:

The blisters occur because of a malfunction in your immune system.

Your body's immune system normally produces antibodies to fight bacteria, viruses or other potentially harmful foreign substances. For reasons that are not clear, the body may develop an antibody to a particular tissue in your body.

Bullous pemphigoid usually appears randomly with no clear factors contributing to the onset of disease. Some cases may be triggered by:

Bullous pemphigoid most commonly occurs in older adults, and the risk increases with age.

To confirm the diagnosis, your doctor may order blood tests and take a small sample of the affected skin (skin biopsy) for laboratory testing.

Your doctor may refer you to a doctor who specializes in conditions of the skin (dermatologist) or eyes (ophthalmologist), depending on your signs and symptoms and the results of your lab tests.

Treatment is focused on healing the skin and relieving itching, while minimizing adverse side effects of medications. Your doctor will likely prescribe one or a combination of the drugs:

If you have bullous pemphigoid, you can help take care of your condition with the following self-care strategies:

You may start by seeing your primary care doctor. He or she may refer you to a doctor who specializes in skin disorders (dermatologist). You may want to bring a friend or relative to your appointment. This person, in addition to offering support, can write down information from your doctor or other clinic staff during the visit.

For bullous pemphigoid, some basic questions to ask your doctor include:

Your doctor will likely ask you a number of questions. Be prepared to answer the following: