Chondrosarcoma is a rare type of cancer that usually begins in the bones, but can sometimes occur in the soft tissue near bones. Chondrosarcoma happens most often in the pelvis, hip and shoulder. More rarely, it can happen in the bones of the spine.

Most chondrosarcomas grow slowly and may not cause many signs and symptoms at first. Some rare types grow rapidly and have a high risk of spreading to other areas of the body, which can make these cancers difficult to treat.

Chondrosarcoma treatment usually involves surgery. Other options might include radiation therapy and chemotherapy.

It's not clear what causes chondrosarcoma. Doctors know that cancer begins when a cell develops changes (mutations) in its DNA. A cell's DNA contains the instructions that tell it what to do. The instructions tell the cell to multiply quickly and to continue living when healthy cells would die. The accumulating cells form a tumor that can grow to invade and destroy normal body tissue. In time, cells can break away and spread (metastasize) to other areas of the body.

Factors that can increase the risk of chondrosarcoma include:

Tests and procedures used to diagnose chondrosarcoma include:

Chondrosarcoma treatment often involves surgery to remove the cancer. Other treatments might be recommended in certain situations. Which options are best for you depends on where your cancer is located, how quickly it's growing, whether it has grown to involve other structures, your overall health and your preferences.

The goal of surgery for chondrosarcoma is to remove the cancer and a margin of healthy tissue around it. The type of surgery you undergo will depend on the location of your chondrosarcoma. Options might include:

Radiation might be recommended for chondrosarcomas located in places that make surgery tricky or if the cancer can't be removed completely during surgery. Radiation may also be used to control cancer that spreads to other areas of the body. 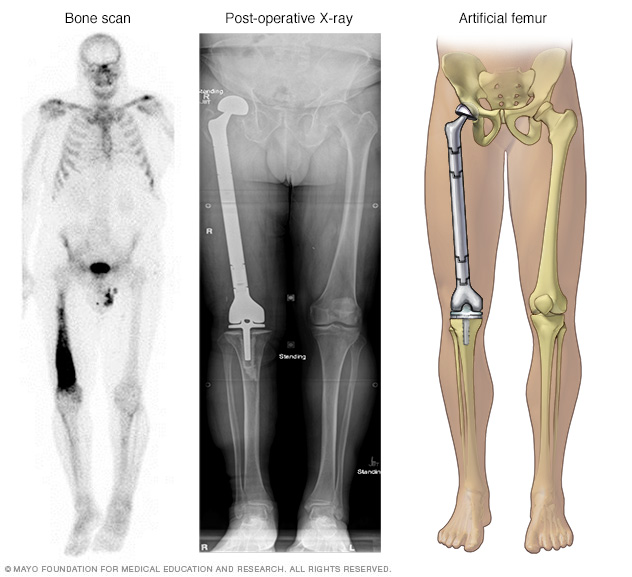 A cancer diagnosis can change your life forever. Each person finds his or her own way of coping with the emotional and physical changes cancer brings. But when you're first diagnosed with cancer, sometimes it's difficult to know what to do next.

Here are some ideas to help you cope:

Start by seeing your family doctor if you have any signs or symptoms that worry you. If your doctor determines you have cancer, you'll likely be referred to one or more specialists, such as doctors who treat cancer (oncologists) and surgeons.

Preparing a list of questions in advance can help you make the most of your time with your doctor. List your questions from most important to least important in case time runs out. For cancer, some basic questions to ask your doctor include:

Your doctor is likely to ask you a number of questions. Being ready to answer them may allow time later to cover other points you want to address. Your doctor may ask: