Crohn's disease is a type of inflammatory bowel disease (IBD). It causes swelling of the tissues (inflammation) in your digestive tract, which can lead to abdominal pain, severe diarrhea, fatigue, weight loss and malnutrition.

Inflammation caused by Crohn's disease can involve different areas of the digestive tract in different people, most commonly the small intestine. This inflammation often spreads into the deeper layers of the bowel.

Crohn's disease can be both painful and debilitating, and sometimes may lead to life-threatening complications.

There's no known cure for Crohn's disease, but therapies can greatly reduce its signs and symptoms and even bring about long-term remission and healing of inflammation. With treatment, many people with Crohn's disease are able to function well. 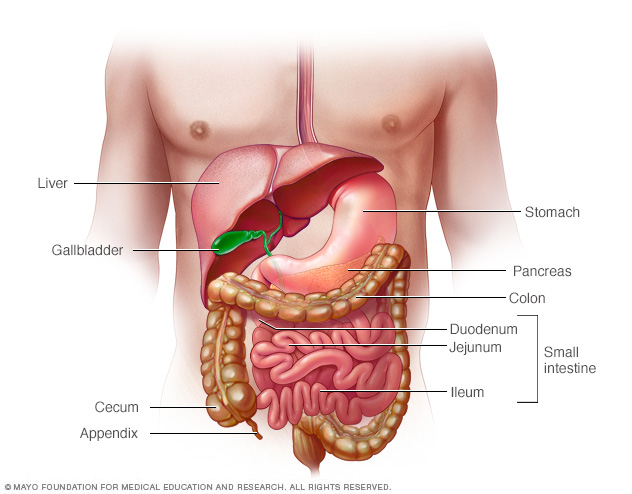 In Crohn's disease, any part of your small or large intestine can be involved. It may involve multiple segments, or it may be continuous. In some people, the disease is only in the colon, which is part of the large intestine.

Signs and symptoms of Crohn's disease can range from mild to severe. They usually develop gradually, but sometimes will come on suddenly, without warning. You may also have periods of time when you have no signs or symptoms (remission).

When the disease is active, symptoms typically include:

Other signs and symptoms

People with severe Crohn's disease may also experience symptoms outside of the intestinal tract, including:

See your doctor if you have persistent changes in your bowel habits or if you have any of the signs and symptoms of Crohn's disease, such as:

The exact cause of Crohn's disease remains unknown. Previously, diet and stress were suspected, but now doctors know that these factors may aggravate, but don't cause, Crohn's disease. Several factors likely play a role in its development.

Risk factors for Crohn's disease may include:

Crohn's disease may lead to one or more of the following complications:

Your doctor will likely use a combination of tests to help confirm a diagnosis of Crohn's disease, including:

There is currently no cure for Crohn's disease, and there is no single treatment that works for everyone. One goal of medical treatment is to reduce the inflammation that triggers your signs and symptoms. Another goal is to improve long-term prognosis by limiting complications. In the best cases, this may lead not only to symptom relief but also to long-term remission.

Anti-inflammatory drugs are often the first step in the treatment of inflammatory bowel disease. They include:

These drugs also reduce inflammation, but they target your immune system, which produces the substances that cause inflammation. For some people, a combination of these drugs works better than one drug alone.

This class of therapies targets proteins made by the immune system. Types of biologics used to treat Crohn's disease include:

Antibiotics can reduce the amount of drainage from fistulas and abscesses and sometimes heal them in people with Crohn's disease. Some researchers also think that antibiotics help reduce harmful bacteria that may be causing inflammation in the intestine. Frequently prescribed antibiotics include ciprofloxacin (Cipro) and metronidazole (Flagyl).

In addition to controlling inflammation, some medications may help relieve your signs and symptoms. But always talk to your doctor before taking any nonprescription medications. Depending on the severity of your Crohn's disease, your doctor may recommend one or more of the following:

Your doctor may recommend a special diet given by mouth or a feeding tube (enteral nutrition) or nutrients infused into a vein (parenteral nutrition) if you have Crohn's disease. This can improve your overall nutrition and allow the bowel to rest. Bowel rest may reduce inflammation in the short term.

Your doctor may use nutrition therapy short term and combine it with medications, such as immune system suppressors. Enteral and parenteral nutrition are typically used to get people healthier prior to surgery or when other medications fail to control symptoms.

Your doctor may also recommend a low residue or low-fiber diet to reduce the risk of intestinal blockage if you have a narrowed bowel (stricture). A low residue diet is designed to reduce the size and number of your stools.

If diet and lifestyle changes, drug therapy, or other treatments don't relieve your signs and symptoms, your doctor may recommend surgery. Nearly half of those with Crohn's disease will require at least one surgery. However, surgery does not cure Crohn's disease.

During surgery, your surgeon removes a damaged portion of your digestive tract and then reconnects the healthy sections. Surgery may also be used to close fistulas and drain abscesses.

The benefits of surgery for Crohn's disease are usually temporary. The disease often recurs, frequently near the reconnected tissue. The best approach is to follow surgery with medication to minimize the risk of recurrence.

Sometimes you may feel helpless when facing Crohn's disease. But changes in your diet and lifestyle may help control your symptoms and lengthen the time between flare-ups.

There's no firm evidence that what you eat actually causes inflammatory bowel disease. But certain foods and beverages can aggravate your signs and symptoms, especially during a flare-up.

It can be helpful to keep a food diary to track what you're eating, as well as how you feel. If you discover that some foods are causing your symptoms to flare, you can try eliminating them.

Here are some general dietary suggestions that may help to manage your condition:

Smoking increases your risk of developing Crohn's disease. And once you have Crohn's disease, smoking can make it worse. People with Crohn's disease who smoke are more likely to have relapses and need medications and repeat surgeries. Quitting smoking can improve the overall health of your digestive tract, as well as provide many other health benefits.

Although stress doesn't cause Crohn's disease, it can make your signs and symptoms worse and may trigger flare-ups. Although it's not always possible to avoid stress, you can learn ways to help manage it, such as:

Many people with Crohn's disease have used some form of complementary and alternative medicine to treat their condition. However, there are few well-designed studies of the safety and effectiveness of these treatments.

Crohn's disease doesn't just affect you physically — it takes an emotional toll as well. If signs and symptoms are severe, your life may revolve around a constant need to run to the toilet. Even if your symptoms are mild, gas and abdominal pain can make it difficult to be out in public. All of these factors can alter your life and may lead to depression. Here are some things you can do:

Although living with Crohn's disease can be discouraging, research is ongoing and the outlook is improving.

Symptoms of Crohn's disease may first prompt you to visit your primary health care provider. Your provider may recommend that you see a specialist who treats digestive diseases (gastroenterologist).

Because appointments can be brief, and there's often a lot of information to discuss, it's a good idea to be well prepared. Here's some information to help you get ready, and what to expect from your provider.

Preparing a list of questions before you go can help you make the most of your visit. List your questions from most important to least important in case time runs out. For Crohn's disease, some basic questions to ask include:

In addition to the questions that you've prepared, don't hesitate to ask additional questions during your appointment.

Your provider is likely to ask you a number of questions, including: