Dressler syndrome is inflammation of the sac surrounding the heart (pericarditis). It's believed to occur as the result of the immune system responding to damage to heart tissue or damage to the sac around the heart (pericardium). The damage can result from a heart attack, surgery or traumatic injury. Symptoms include chest pain, which can feel like chest pain from a heart attack. 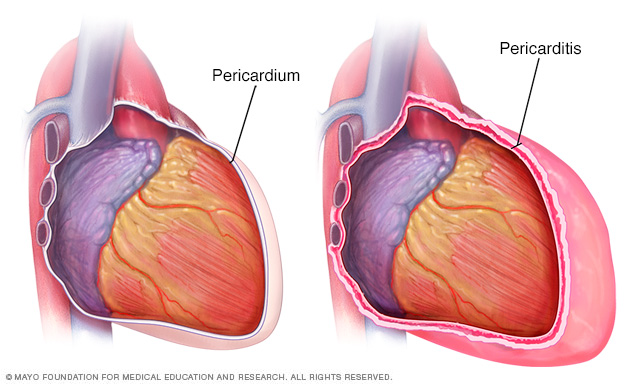 Symptoms are likely to appear weeks to months after a heart attack, surgery or injury to the chest. Symptoms might include:

Seek emergency care for sudden or persistent chest pain, which may signal a heart attack or other serious disorder.

Experts think Dressler syndrome is caused by the immune system's response to heart damage. The body reacts to the injured tissue by sending immune cells and proteins (antibodies) to clean up and repair the affected area. Sometimes this response causes inflammation in the pericardium.

Dressler syndrome may occur after certain heart surgeries or procedures.

The immune system reaction that causes Dressler syndrome might also lead to fluid buildup in the tissues surrounding the lungs (pleural effusion).

Rarely, Dressler syndrome can cause more-serious complications, including:

A health care provider does a thorough physical examination, including listening to the heart with a stethoscope. A sound called a pericardial rub can occur when the pericardium is inflamed or when fluid has collected around the heart.

Tests that can help diagnose Dressler syndrome include:

The goals of treatment for Dressler syndrome are to manage pain and reduce inflammation. Treatment may involve medications and, if complications occur, surgery.

The main treatment for Dressler syndrome is medication to reduce inflammation, including nonsteroidal anti-inflammatory drugs (NSAIDs) such as:

If Dressler syndrome occurs after a heart attack, usually aspirin is preferred over other NSAIDs.

Indomethacin also may be given.

If those medications don't help, the next step might be corticosteroids. These powerful immune system suppressants can reduce inflammation related to Dressler syndrome.

Corticosteroids can have serious side effects and might interfere with the healing of damaged heart tissue after a heart attack or surgery. For those reasons, corticosteroids are generally used only when other treatments don't work.

Complications of Dressler syndrome can require more-invasive treatments, including:

If you're being seen in the emergency room for chest pain, you might be asked: