Earwax blockage occurs when earwax (cerumen) accumulates in your ear or becomes too hard to wash away naturally.

Earwax is a helpful and natural part of your body's defenses. It cleans, lubricates and protects your ear canal by trapping dirt and slowing the growth of bacteria.

If earwax blockage becomes a problem, you or your doctor can take simple steps to remove the wax safely.

Signs and symptoms of earwax blockage may include:

If you're experiencing the signs and symptoms of earwax blockage, talk to your doctor.

Signs and symptoms could indicate another condition. You may think you can deal with earwax on your own, but there's no way to know if you have excessive earwax without having someone, usually your doctor, look in your ears. Having signs and symptoms, such as earache or decreased hearing, doesn't necessarily mean you have wax buildup. It's possible you have another medical condition involving your ears that may need attention.

Wax removal is most safely done by a doctor. Your ear canal and eardrum are delicate and can be damaged easily by excess earwax. Don't try to remove earwax yourself with any device placed into your ear canal, especially if you have had ear surgery, have a hole (perforation) in your eardrum, or are having ear pain or drainage.

Children usually have their ears checked as part of any medical examination. If necessary, a doctor can remove excess earwax from your child's ear during an office visit.

The wax in your ears is secreted by glands in the skin that lines the outer half of your ear canals. The wax and tiny hairs in these passages trap dust and other foreign particles that could damage deeper structures, such as your eardrum.

In most people, a small amount of earwax regularly makes its way to the opening of the ear, where it's washed away or falls out as new wax is secreted to replace it. If you secrete an excessive amount of wax or if earwax isn't cleared effectively, it may build up and block your ear canal.

Earwax blockages commonly occur when people try to clean their ears on their own by placing cotton swabs or other items in their ears. This often just pushes wax deeper into the ear, rather than removing it.

Your doctor can determine whether you have earwax blockage by looking in your ear with a special instrument that lights and magnifies your inner ear (otoscope).

Your doctor can remove excess wax using a small, curved instrument called a curet or by using suction while inspecting the ear. Your doctor can also flush out the wax using a water pick or a rubber-bulb syringe filled with warm water.

If earwax buildup is a recurring problem, your doctor may recommend that you use a wax-removal medication, such as carbamide peroxide (Debrox Earwax Removal Kit, Murine Ear Wax Removal System). Because these drops can irritate the delicate skin of the eardrum and ear canal, use them only as directed.

Some people use ear candling, a technique that involves placing a lighted, hollow, cone-shaped candle into the ear, to try to remove earwax. The theory is that the heat from the flame will create a vacuum seal and the earwax will adhere to the candle.

However, ear candling is not a recommended treatment for earwax blockage. Research has found that ear candling doesn't work, and it may result in injury, such as burns, ear canal obstructions and even perforations.

Talk to your doctor before trying any alternative remedies for removing earwax. 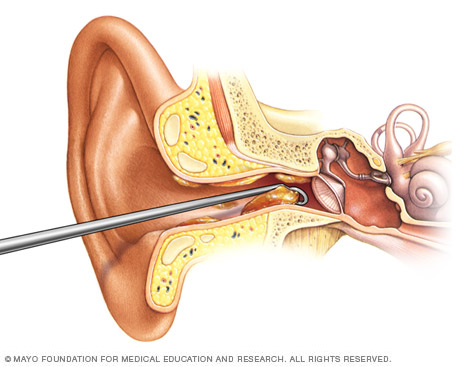 If your eardrum doesn't contain a tube or have a hole in it, these self-care measures may help you remove excess earwax that's blocking your ear canal:

You may need to repeat this wax-softening and irrigation procedure a few times before the excess earwax falls out. However, the softening agents may only loosen the outer layer of the wax and cause it to lodge deeper in the ear canal or against the eardrum. If your symptoms don't improve after a few treatments, see your doctor.

Earwax removal kits available in stores also can be effective at removing wax buildup. Ask your doctor for advice on how to properly select and use alternative earwax removal methods.

Don't try to dig it out

Never attempt to dig out excessive or hardened earwax with available items, such as a paper clip, a cotton swab or a hairpin. You may push the wax farther into your ear and cause serious damage to the lining of your ear canal or eardrum.

You're likely to start by seeing your family doctor or a general practitioner. In some rare cases, however, you may be referred to a specialist in ear disorders (ear, nose and throat specialist).

As you prepare for your appointment, it's a good idea to write a list of questions. Your doctor may have questions for you as well. He or she may ask:

Don't attempt to dig out earwax with cotton swabs or other items — such as hairpins or pen caps. This can push the wax farther into the ear and cause serious injury to the ear canal or eardrum.