Endometrial cancer is a type of cancer that begins in the uterus. The uterus is the hollow, pear-shaped pelvic organ where fetal development occurs. 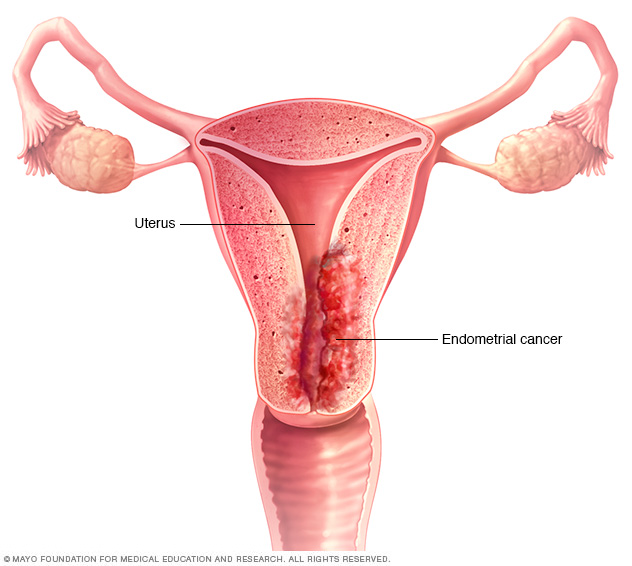 Signs and symptoms of endometrial cancer may include:

Make an appointment with your doctor if you experience any persistent signs or symptoms that worry you.

Doctors don't know what causes endometrial cancer. What's known is that something occurs to create changes (mutations) in the DNA of cells in the endometrium — the lining of the uterus.

Factors that increase the risk of endometrial cancer include: 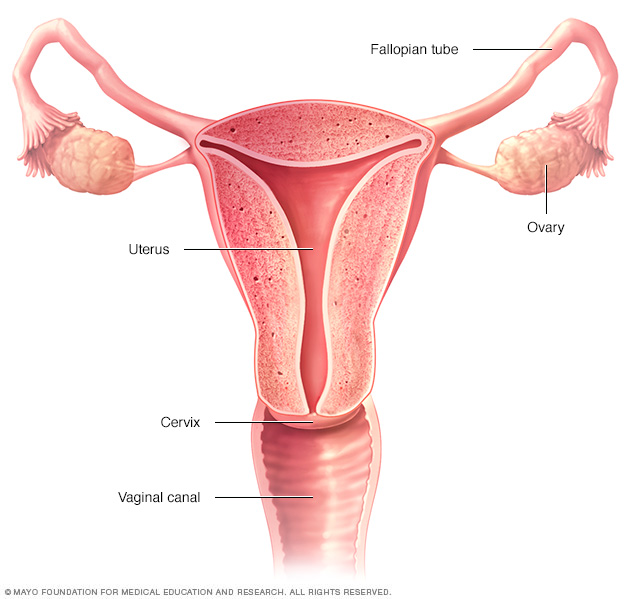 To reduce your risk of endometrial cancer, you may wish to:

Tests and procedures used to diagnose endometrial cancer include:

If endometrial cancer is found, you'll likely be referred to a doctor who specializes in treating cancers involving the female reproductive system (gynecologic oncologist).

Your doctor uses information from these tests and procedures to assign your cancer a stage. The stages of endometrial cancer are indicated using Roman numerals ranging from I to IV, with the lowest stage indicating that the cancer hasn't grown beyond the uterus. By stage IV, the cancer has grown to involve nearby organs, such as the bladder, or has spread to distant areas of the body. 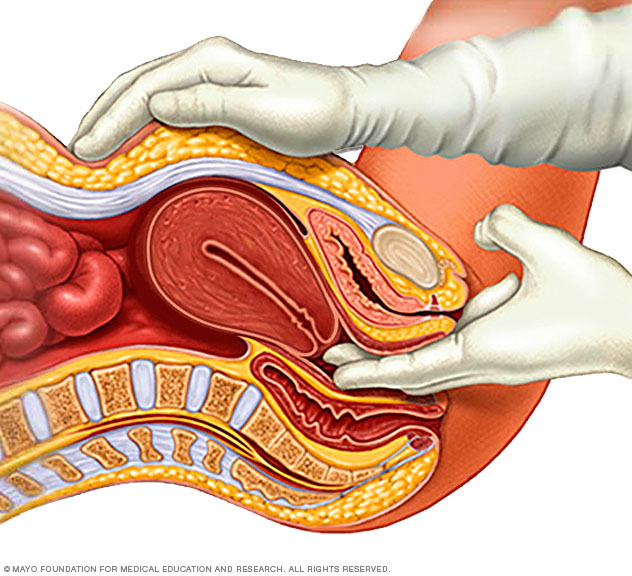 Treatment for endometrial cancer is usually with surgery to remove the uterus, fallopian tubes and ovaries. Another option is radiation therapy with powerful energy. Drug treatments for endometrial cancer include chemotherapy with powerful drugs and hormone therapy to block hormones that cancer cells rely on. Other options might be targeted therapy with drugs that attack specific weaknesses in the cancer cells and immunotherapy to help your immune system fight cancer.

Treatment for endometrial cancer usually involves an operation to remove the uterus (hysterectomy), as well as to remove the fallopian tubes and ovaries (salpingo-oophorectomy). A hysterectomy makes it impossible for you to become pregnant in the future. Also, once your ovaries are removed, you'll experience menopause, if you haven't already.

During surgery, your surgeon will also inspect the areas around your uterus to look for signs that cancer has spread. Your surgeon may also remove lymph nodes for testing. This helps determine your cancer's stage.

Radiation therapy uses powerful energy beams, such as X-rays and protons, to kill cancer cells. In some instances, your doctor may recommend radiation to reduce your risk of a cancer recurrence after surgery. In certain situations, radiation therapy may also be recommended before surgery, to shrink a tumor and make it easier to remove.

If you aren't healthy enough to undergo surgery, you may opt for radiation therapy only.

Chemotherapy is sometimes recommended after surgery if there's an increased risk that the cancer might return. It can also be used before surgery to shrink the cancer so that it's more likely to be removed completely during surgery.

Chemotherapy may be recommended for treating advanced or recurrent endometrial cancer that has spread beyond the uterus.

Hormone therapy involves taking medications to lower the hormone levels in the body. In response, cancer cells that rely on hormones to help them grow might die. Hormone therapy may be an option if you have advanced endometrial cancer that has spread beyond the uterus.

Palliative care is specialized medical care that focuses on providing relief from pain and other symptoms of a serious illness. Palliative care specialists work with you, your family and your other doctors to provide an extra layer of support that complements your ongoing care. Palliative care can be used while undergoing other aggressive treatments, such as surgery, chemotherapy or radiation therapy.

When palliative care is used along with all of the other appropriate treatments, people with cancer may feel better and live longer.

Palliative care is provided by a team of doctors, nurses and other specially trained professionals. Palliative care teams aim to improve the quality of life for people with cancer and their families. This form of care is offered alongside curative or other treatments you may be receiving.

After you receive a diagnosis of endometrial cancer, you may have many questions, fears and concerns. Every person eventually finds a way to cope with an endometrial cancer diagnosis. In time, you'll find what works for you. Until then, you might try to:

Make an appointment with your primary care doctor or a gynecologist if you have signs and symptoms that worry you. If you're diagnosed with endometrial cancer, you're likely to be referred to a doctor who specializes in cancers of the female reproductive system (gynecologic oncologist).

Because appointments can be brief and there's often a lot to discuss, it's a good idea to be well prepared. Here's some information to help you get ready, and what you can expect from your doctor.

Your time with your doctor is limited, so preparing a list of questions ahead of time can help you make the most of your time together. List your questions from most important to least important in case time runs out. For endometrial cancer, some basic questions to ask your doctor include:

In addition to the questions that you've prepared to ask your doctor, don't hesitate to ask additional questions during your appointment.

Your doctor will likely have questions for you. If you're ready to answer them, it may help reserve time to go over points you want to spend more time on. Your doctor may ask: