Gynecomastia (guy-nuh-koh-MAS-tee-uh) is an increase in the amount of breast gland tissue in boys or men, caused by an imbalance of the hormones estrogen and testosterone. Gynecomastia can affect one or both breasts, sometimes unevenly.

Pseudogynecomastia refers to an increase in fat but not glandular tissue in male breasts.

Newborns, boys going through puberty and older men may develop gynecomastia as a result of normal changes in hormone levels, though other causes also exist.

Generally, gynecomastia isn't a serious problem, but it can be tough to cope with the condition. Men and boys with gynecomastia sometimes have pain in their breasts and may feel embarrassed.

Gynecomastia may go away on its own. If it persists, medication or surgery may help. 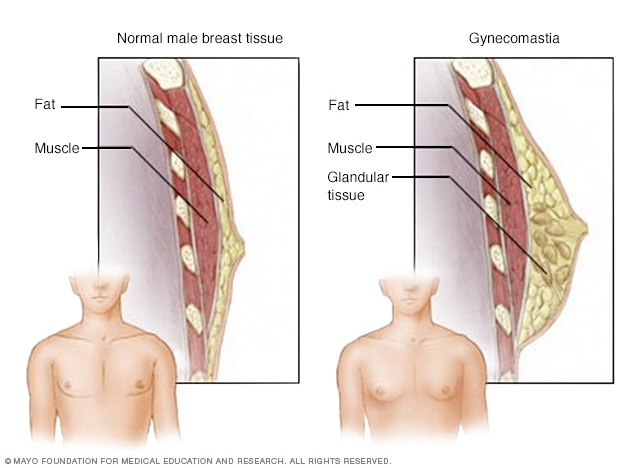 Most adult men with gynecomastia report no symptoms. Signs and symptoms of the condition may include:

See your doctor if you have:

Gynecomastia is triggered by a decrease in the amount of the hormone testosterone compared with estrogen. The decrease can be caused by conditions that block the effects of testosterone, reduce testosterone or increase your estrogen level.

Several things can upset the hormone balance, including the following.

Most people think of estrogen as an exclusively female hormone, but men also produce it — though usually in small quantities. Male estrogen levels that are too high or are out of balance with testosterone levels can cause gynecomastia.

A number of medications can cause gynecomastia. These include:

Substances that can cause gynecomastia include:

Several health conditions can cause gynecomastia by affecting the balance of hormones. These include:

Plant oils, such as tea tree or lavender, used in shampoos, soaps or lotions have been associated with gynecomastia. This is probably due to their weak estrogenic activity.

Risk factors for gynecomastia include:

Gynecomastia has few physical complications, but it can cause psychological or emotional problems caused by appearance.

There are a few factors you can control that may reduce the risk of gynecomastia:

A diagnosis of gynecomastia is based on a review of your symptoms and a medical exam that includes a careful evaluation of your breast tissue, abdomen and genitals.

Your doctor will likely order tests to identify a possible cause of gynecomastia, to screen for possible breast cancer and to rule out other conditions. These may include:

Conditions that cause similar symptoms

Your doctor will want to be sure that your breast swelling is gynecomastia and not another condition. Other conditions that can cause similar symptoms include:

If you're taking medications that may be the cause of gynecomastia, your doctor may recommend stopping them or substituting another medication.

In adolescents with no apparent cause of gynecomastia other than normal hormone changes during puberty, the doctor may recommend periodic reevaluations every three to six months to see if the condition improves on its own. Gynecomastia in adolescents often goes away without treatment in less than two years.

Treatment may be necessary if gynecomastia doesn't improve on its own or if it causes significant pain, tenderness or embarrassment.

Medications used to treat breast cancer and other conditions may be helpful for some men with gynecomastia. They include:

Although these medications are approved by the Food and Drug Administration, they have not been approved specifically for use in people with gynecomastia.

If enlarged breasts are significant and bothersome even after initial treatment or observation, your doctor may advise surgery.

For men, enlarged breasts can be stressful and embarrassing. Gynecomastia can be difficult to hide and a challenge to romantic relationships. During puberty, gynecomastia can make boys a target for teasing from peers. It can make activities such as swimming or changing in the locker room traumatic.

Whatever your age, you may feel like your body has betrayed you and you may feel unhappy with yourself. These feelings are normal, but to help you cope you can: