Anyone can develop epilepsy. Epilepsy affects both males and females of all races, ethnic backgrounds and ages.

Seizure symptoms can vary widely. Some people with epilepsy simply stare blankly for a few seconds during a seizure, while others repeatedly twitch their arms or legs. Having a single seizure doesn't mean you have epilepsy. At least two seizures without a known trigger (unprovoked seizures) that happen at least 24 hours apart are generally required for an epilepsy diagnosis.

Because epilepsy is caused by abnormal activity in the brain, seizures can affect any process your brain coordinates. Seizure signs and symptoms may include:

Symptoms vary depending on the type of seizure. In most cases, a person with epilepsy will tend to have the same type of seizure each time, so the symptoms will be similar from episode to episode.

Doctors generally classify seizures as either focal or generalized, based on how and where the abnormal brain activity begins.

When seizures appear to result from abnormal activity in just one area of your brain, they're called focal seizures. These seizures fall into two categories:

Symptoms of focal seizures may be confused with other neurological disorders, such as migraine, narcolepsy or mental illness. A thorough examination and testing are needed to distinguish epilepsy from other disorders.

Epilepsy has no identifiable cause in about half the people with the condition. In the other half, the condition may be traced to various factors, including:

Certain factors may increase your risk of epilepsy:

Having a seizure at certain times can lead to circumstances that are dangerous to yourself or others.

Other life-threatening complications of epilepsy are uncommon, but may happen, such as:

To diagnose your condition, your doctor will review your symptoms and medical history. Your doctor may order several tests to diagnose epilepsy and determine the cause of seizures. Your evaluation may include:

Your doctor may also suggest tests to detect brain abnormalities, such as:

Along with your test results, your doctor may use a combination of analysis techniques to help pinpoint where in the brain seizures start:

Accurate diagnosis of your seizure type and where seizures begin gives you the best chance for finding an effective treatment. 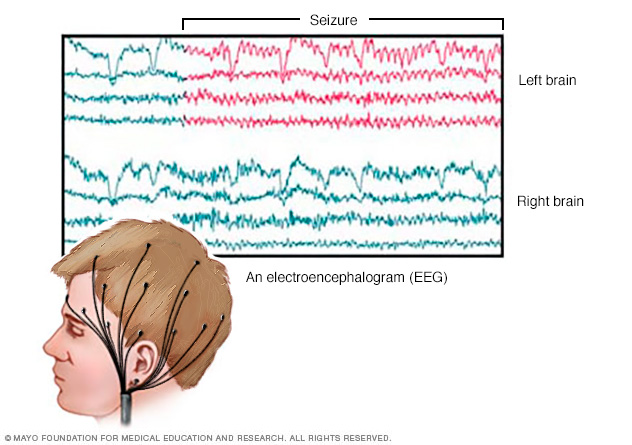 Doctors generally begin by treating epilepsy with medication. If medications don't treat the condition, doctors may propose surgery or another type of treatment.

Most people with epilepsy can become seizure-free by taking one anti-seizure medication, which is also called anti-epileptic medication. Others may be able to decrease the frequency and intensity of their seizures by taking a combination of medications.

Your doctor likely will first prescribe a single medication at a relatively low dosage and may increase the dosage gradually until your seizures are well controlled.

There are more than 20 different types of anti-seizure medications available. The medication that your doctor chooses to treat your epilepsy depends on the type of seizures you have, as well as other factors such as your age and other health conditions.

More-severe but rare side effects include:

To achieve the best seizure control possible with medication, follow these steps:

At least half the people newly diagnosed with epilepsy will become seizure-free with their first medication. If anti-epileptic medications don't provide satisfactory results, your doctor may suggest surgery or other therapies. You'll have regular follow-up appointments with your doctor to evaluate your condition and medications.

When medications fail to provide adequate control over seizures, surgery may be an option. With epilepsy surgery, a surgeon removes the area of your brain that's causing seizures.

For some types of epilepsy, minimally invasive approaches such as MRI-guided stereotactic laser ablation may provide effective treatment when an open procedure may be too risky. In these procedures, doctors direct a thermal laser probe at the specific area in the brain causing seizures to destroy that tissue in an effort to better control the seizures.

Although many people continue to need some medication to help prevent seizures after successful surgery, you may be able to take fewer drugs and reduce your dosages.

In a small number of cases, surgery for epilepsy can cause complications such as permanently altering your thinking (cognitive) abilities. Talk to your surgeon about his or her experience, success rates, and complication rates with the procedure you're considering.

Apart from medications and surgery, these potential therapies offer an alternative for treating epilepsy:

Researchers are studying many potential new treatments for epilepsy, including:

Understanding your condition can help you take better control of it:

Uncontrolled seizures and their effects on your life may at times feel overwhelming or lead to depression. It's important not to let epilepsy hold you back. You can still live an active, full life. To help cope:

If your seizures are so severe that you can't work outside your home, there are still ways to feel productive and connected to people. You may consider working from home.

Let people you work and live with know the correct way to handle a seizure in case they are with you when you have one. You may offer them suggestions, such as:

You're likely to start by seeing your family doctor or a general practitioner. However, in some cases when you call to set up an appointment, you may be referred immediately to a specialist, such as a doctor trained in brain and nervous system conditions (neurologist) or a neurologist trained in epilepsy (epileptologist).

For epilepsy, some basic questions to ask your doctor include:

Certain conditions and activities can trigger seizures, so it may be helpful to:

Also, it's important to start keeping a log of your seizures before you visit your doctor.