Lung cancer is a type of cancer that begins in the lungs. Your lungs are two spongy organs in your chest that take in oxygen when you inhale and release carbon dioxide when you exhale.

Lung cancer is the leading cause of cancer deaths worldwide.

People who smoke have the greatest risk of lung cancer, though lung cancer can also occur in people who have never smoked. The risk of lung cancer increases with the length of time and number of cigarettes you've smoked. If you quit smoking, even after smoking for many years, you can significantly reduce your chances of developing lung cancer. 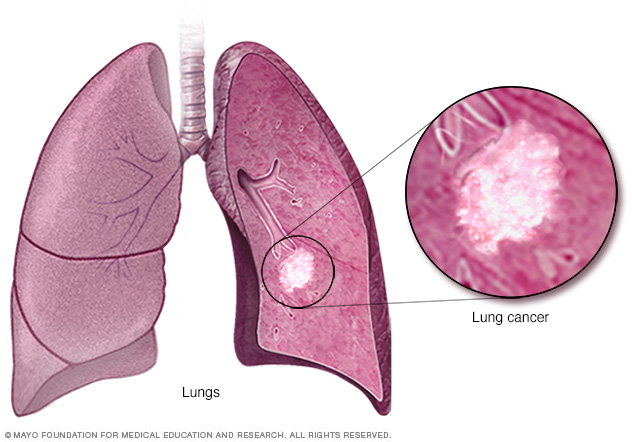 Signs and symptoms of lung cancer may include:

If you smoke and have been unable to quit, make an appointment with your doctor. Your doctor can recommend strategies for quitting smoking, such as counseling, medications and nicotine replacement products.

Doctors believe smoking causes lung cancer by damaging the cells that line the lungs. When you inhale cigarette smoke, which is full of cancer-causing substances (carcinogens), changes in the lung tissue begin almost immediately.

At first your body may be able to repair this damage. But with each repeated exposure, normal cells that line your lungs are increasingly damaged. Over time, the damage causes cells to act abnormally and eventually cancer may develop.

The two general types of lung cancer include:

Risk factors for lung cancer include:

Lung cancer can cause complications, such as:

There's no sure way to prevent lung cancer, but you can reduce your risk if you:

Discuss your lung cancer risk with your doctor. Together you can decide whether lung cancer screening is right for you.

If there's reason to think that you may have lung cancer, your doctor can order a number of tests to look for cancerous cells and to rule out other conditions.

Careful analysis of your cancer cells in a lab will reveal what type of lung cancer you have. Results of sophisticated testing can tell your doctor the specific characteristics of your cells that can help determine your prognosis and guide your treatment.

Tests to determine the extent of the cancer

Once your lung cancer has been diagnosed, your doctor will work to determine the extent (stage) of your cancer. Your cancer's stage helps you and your doctor decide what treatment is most appropriate.

Staging tests may include imaging procedures that allow your doctor to look for evidence that cancer has spread beyond your lungs. These tests include CT, MRI, positron emission tomography (PET) and bone scans. Not every test is appropriate for every person, so talk with your doctor about which procedures are right for you.

The stages of lung cancer are indicated by Roman numerals that range from 0 to IV, with the lowest stages indicating cancer that is limited to the lung. By stage IV, the cancer is considered advanced and has spread to other areas of the body. 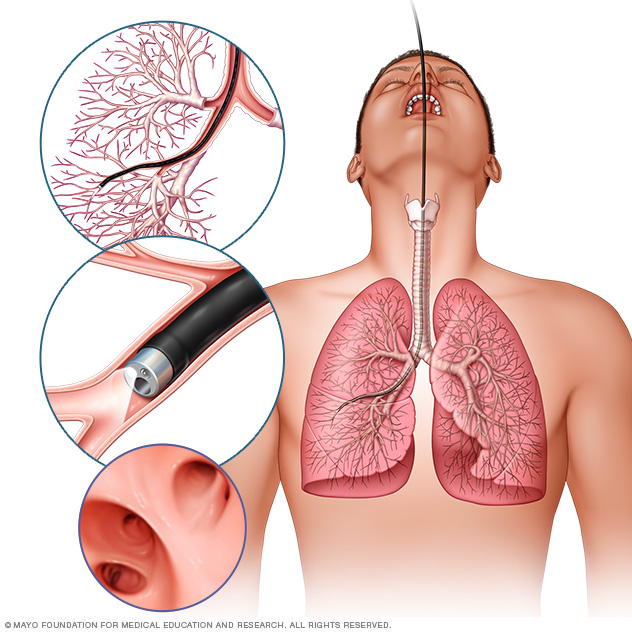 You and your doctor choose a cancer treatment plan based on a number of factors, such as your overall health, the type and stage of your cancer, and your preferences.

In some cases, you may choose not to undergo treatment. For instance, you may feel that the side effects of treatment will outweigh the potential benefits. When that's the case, your doctor may suggest comfort care to treat only the symptoms the cancer is causing, such as pain or shortness of breath.

If you undergo surgery, your surgeon may also remove lymph nodes from your chest in order to check them for signs of cancer.

For people with locally advanced lung cancer, radiation may be used before surgery or after surgery. It's often combined with chemotherapy treatments. If surgery isn't an option, combined chemotherapy and radiation therapy may be your primary treatment.

For advanced lung cancers and those that have spread to other areas of the body, radiation therapy may help relieve symptoms, such as pain.

Chemotherapy uses drugs to kill cancer cells. One or more chemotherapy drugs may be given through a vein in your arm (intravenously) or taken orally. A combination of drugs usually is given in a series of treatments over a period of weeks or months, with breaks in between so that you can recover.

Chemotherapy is often used after surgery to kill any cancer cells that may remain. It can be used alone or combined with radiation therapy. Chemotherapy may also be used before surgery to shrink cancers and make them easier to remove.

In people with advanced lung cancer, chemotherapy can be used to relieve pain and other symptoms.

Stereotactic body radiotherapy may be an option for people with small lung cancers who can't undergo surgery. It may also be used to treat lung cancer that spreads to other parts of the body, including the brain.

Many targeted therapy drugs are used to treat lung cancer, though most are reserved for people with advanced or recurrent cancer.

Some targeted therapies only work in people whose cancer cells have certain genetic mutations. Your cancer cells may be tested in a laboratory to see if these drugs might help you.

Immunotherapy treatments are generally reserved for people with locally advanced lung cancers and cancers that have spread to other parts of the body.

People with lung cancer often experience signs and symptoms of the cancer, as well as side effects of treatment. Supportive care, also known as palliative care, is a specialty area of medicine that involves working with a doctor to minimize your signs and symptoms.

Your doctor may recommend that you meet with a palliative care team soon after your diagnosis to ensure that you're comfortable during and after your cancer treatment. 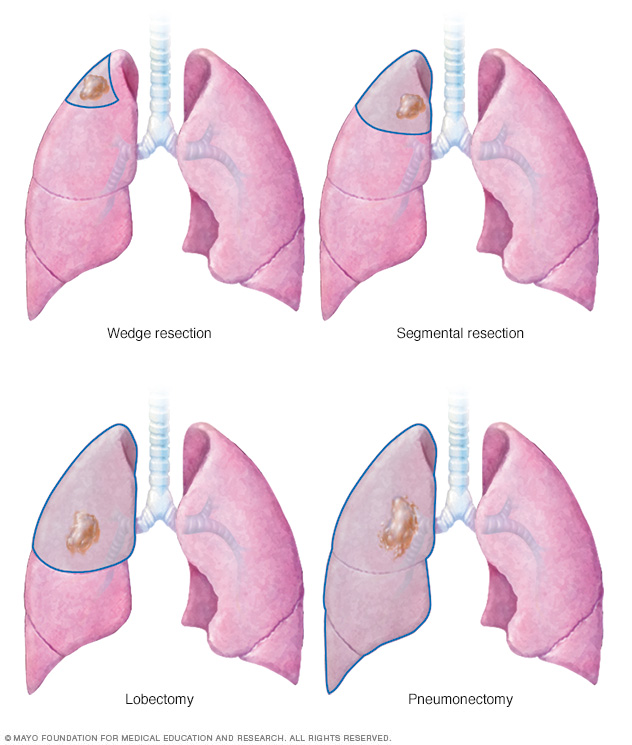 Coping with shortness of breath

Many people with lung cancer experience shortness of breath at some point in the course of the disease. Treatments such as supplemental oxygen and medications are available to help you feel more comfortable, but they aren't always enough.

To cope with shortness of breath, it may help to:

The American College of Chest Physicians suggests people with lung cancer may find comfort in:

A diagnosis of cancer can be overwhelming. With time you'll find ways to cope with the distress and uncertainty of cancer. Until then, you may find it helps to:

If you have signs and symptoms that worry you, start by seeing your family doctor. If your doctor suspects you have lung cancer, you'll likely be referred to a specialist. Specialists who treat people with lung cancer can include:

Because appointments can be brief, and because there's often a lot to discuss, it's a good idea to be well prepared. To help you get ready, try to:

Questions to ask if you've been diagnosed with lung cancer

Your time with your doctor is limited, so preparing a list of questions will help you make the most of your time together. List your questions from most important to least important in case time runs out. For lung cancer, some basic questions to ask include:

Your doctor is likely to ask you a number of questions. Being ready to answer them may allow more time later to cover other points you want to address. Your doctor may ask: