Malaria is a disease caused by a parasite. The parasite is spread to humans through the bites of infected mosquitoes. People who have malaria usually feel very sick with a high fever and shaking chills.

While the disease is uncommon in temperate climates, malaria is still common in tropical and subtropical countries. Each year nearly 290 million people are infected with malaria, and more than 400,000 people die of the disease.

To reduce malaria infections, world health programs distribute preventive drugs and insecticide-treated bed nets to protect people from mosquito bites. The World Health Organization has recommended a malaria vaccine for use in children who live in countries with high numbers of malaria cases.

Protective clothing, bed nets and insecticides can protect you while traveling. You also can take preventive medicine before, during and after a trip to a high-risk area. Many malaria parasites have developed resistance to common drugs used to treat the disease.

Signs and symptoms of malaria may include:

Some people who have malaria experience cycles of malaria "attacks." An attack usually starts with shivering and chills, followed by a high fever, followed by sweating and a return to normal temperature.

Malaria signs and symptoms typically begin within a few weeks after being bitten by an infected mosquito. However, some types of malaria parasites can lie dormant in your body for up to a year.

Talk to your doctor if you experience a fever while living in or after traveling to a high-risk malaria region. If you have severe symptoms, seek emergency medical attention.

Malaria is caused by a single-celled parasite of the genus plasmodium. The parasite is transmitted to humans most commonly through mosquito bites.

Other modes of transmission

Because the parasites that cause malaria affect red blood cells, people can also catch malaria from exposure to infected blood, including: 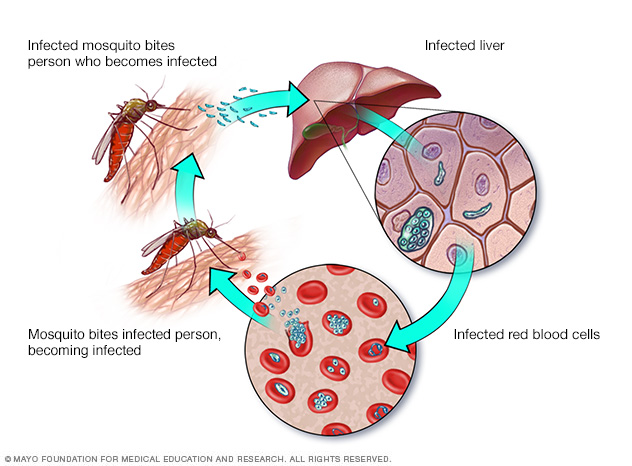 The greatest risk factor for developing malaria is to live in or to visit areas where the disease is common. These include the tropical and subtropical regions of:

The degree of risk depends on local malaria control, seasonal changes in malaria rates and the precautions you take to prevent mosquito bites.

People at increased risk of serious disease include:

In many countries with high malaria rates, the problem is worsened by lack of access to preventive measures, medical care and information.

Malaria can be fatal, particularly when caused by the plasmodium species common in Africa. The World Health Organization estimates that about 94% of all malaria deaths occur in Africa — most commonly in children under the age of 5.

Malaria deaths are usually related to one or more serious complications, including:

Some varieties of the malaria parasite, which typically cause milder forms of the disease, can persist for years and cause relapses.

If you live in or are traveling to an area where malaria is common, take steps to avoid mosquito bites. Mosquitoes are most active between dusk and dawn. To protect yourself from mosquito bites, you should:

If you'll be traveling to a location where malaria is common, talk to your doctor a few months ahead of time about whether you should take drugs before, during and after your trip to help protect you from malaria parasites.

In general, the drugs taken to prevent malaria are the same drugs used to treat the disease. What drug you take depends on where and how long you are traveling and your own health.

The World Health Organization has recommended a malaria vaccine for use in children who live in countries with high numbers of malaria cases.

Researchers are continuing to develop and study malaria vaccines to prevent infection.

To diagnose malaria, your doctor will likely review your medical history and recent travel, conduct a physical exam, and order blood tests. Blood tests can indicate:

Some blood tests can take several days to complete, while others can produce results in less than 15 minutes. Depending on your symptoms, your doctor may order additional diagnostic tests to assess possible complications.

Malaria is treated with prescription drugs to kill the parasite. The types of drugs and the length of treatment will vary, depending on:

The most common antimalarial drugs include:

Other common antimalarial drugs include:

If you suspect you have malaria or that you've been exposed, you're likely to start by seeing your family doctor. However, in some cases when you call to set up an appointment, you may be referred to an infectious disease specialist. If you have severe symptoms — especially during or after travel in an area where malaria is common — seek emergency medical attention.

Before your appointment, you might want to write down answers to the following questions: