Measles is a childhood infection caused by a virus. Once quite common, measles can now almost always be prevented with a vaccine.

Also called rubeola, measles spreads easily and can be serious and even fatal for small children. While death rates have been falling worldwide as more children receive the measles vaccine, the disease still kills more than 200,000 people a year, mostly children.

As a result of high vaccination rates in general, measles hasn't been widespread in the United States in about two decades. Most recent measles cases in the U.S. originated outside the country and occurred in people who were unvaccinated or who didn't know whether or not they had been vaccinated. 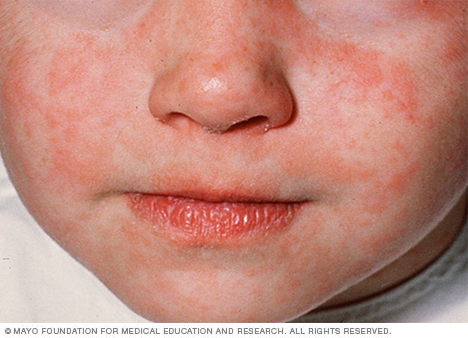 The infection occurs in stages over 2 to 3 weeks.

When can a person spread the measles virus?

A person with measles can spread the virus to others for about eight days, starting four days before the rash appears and ending when the rash has been present for four days.

Review your family's vaccination records with your provider, especially before your children start day care, school or college and before international travel outside of the U.S.

Measles is a highly contagious illness. This means it's very easily spread to others. Measles is caused by a virus found in the nose and throat of an infected child or adult. When someone with measles coughs, sneezes or talks, infectious droplets spray into the air, where other people can breathe them in. The infectious droplets can hang in the air for about an hour.

The infectious droplets may also land on a surface, where they can live and spread for several hours. You can get the measles virus by putting your fingers in your mouth or nose or rubbing your eyes after touching the infected surface.

Measles is highly contagious from about four days before to four days after the rash appears. About 90% of people who haven't had measles or been vaccinated against measles will become infected when exposed to someone with the measles virus.

Risk factors for measles include:

Complications of measles may include:

The U.S. Centers for Disease Control and Prevention (CDC) recommends that children and adults receive the measles vaccine to prevent measles.

The measles vaccine is usually given as a combined measles-mumps-rubella (MMR) vaccine. This vaccine may also include the chickenpox (varicella) vaccine — MMRV vaccine. Health care providers recommend that children receive the MMR vaccine between 12 and 15 months of age, and again between 4 and 6 years of age — before entering school.

The MMR vaccine's two doses are 97% effective in preventing measles and protecting against it for life. In the small number of people who get measles after being vaccinated, the symptoms are generally mild.

Babies born to women who have received the vaccine or who are already immune because they had measles are usually protected from measles for about 6 months after birth. If a child requires protection from measles before 12 months of age — for example, for foreign travel — the vaccine can be given as early as 6 months of age. But children who are vaccinated early still need to be vaccinated at the recommended ages later.

Providing a child with the MMR vaccine as a combination of recommended vaccines can prevent a child's delay in protection against infection from measles, mumps and rubella — and with fewer shots. The combination vaccine is as safe and effective as the vaccines given separately. Side effects are generally mild and may include a sore arm where the shot was given and fever.

You may need the measles vaccine if you're an adult who does not have proof of immunity and:

Proof of immunity — protection from getting measles infection — includes:

If you're not sure if you need the measles vaccine, talk to your health care provider.

Preventing measles during an outbreak or known infection

If someone in your household has measles, take these precautions to protect family and friends without immunity:

Getting vaccinated with the measles vaccine is important for:

No proven link between the MMR vaccine and autism

After the MMR study in 1998, some drops in vaccine numbers were found in the UK and elsewhere, and some people believed there was a possible link. Since then, widespread concerns have been raised about a possible link between the MMR vaccine and autism. However, extensive reports from the American Academy of Pediatrics, the National Academy of Medicine, and the CDC conclude that there is no scientifically proven link between the MMR vaccine and autism.

These organizations note that autism is often identified in toddlers between the ages of 18 and 30 months, which is about the time children are given their first MMR vaccine. But this coincidence in timing shouldn't be mistaken for a cause-and-effect relationship.

Your health care provider can usually diagnose measles based on the disease's characteristic rash as well as a small, bluish-white spot on a bright red background — Koplik's spot — on the inside lining of the cheek. Your provider may ask about whether you or your child has received measles vaccines, whether you have traveled internationally outside of the U.S. recently, and if you've had contact with anyone who has a rash or fever.

However, many providers have never seen measles. The rash can be confused with many other illnesses, too. If necessary, a blood test can confirm whether the rash is measles. The measles virus can also be confirmed with a test that generally uses a throat swab or urine sample.

There's no specific treatment for a measles infection once it occurs. Treatment includes providing comfort measures to relieve symptoms, such as rest, and treating or preventing complications.

However, some measures can be taken to protect individuals who don't have immunity to measles after they've been exposed to the virus.

Treatment for a measles infection may include:

If you or your child has measles, keep in touch with your health care provider as you monitor the progress of the disease and watch for complications. Also try these comfort measures:

If you suspect that you or your child has measles, you need to contact your health care provider. When you check in for the appointment, be sure to tell the check-in desk that you suspect an infectious disease. You and your child may be asked to wear a face mask or shown to an exam room immediately.

Some basic questions to ask include:

Your health care provider may ask that you come in before or after office hours to reduce the risk of exposing others to measles. In addition, if the provider believes that you or your child has measles, the provider must report those findings to the local health department.

Your provider is likely to ask you a number of questions, such as:

While you're waiting to see the health care provider: