A meningioma is a tumor that arises from the meninges — the membranes that surround the brain and spinal cord. Although not technically a brain tumor, it is included in this category because it may compress or squeeze the adjacent brain, nerves and vessels. Meningioma is the most common type of tumor that forms in the head.

Most meningiomas grow very slowly, often over many years without causing symptoms. But sometimes, their effects on nearby brain tissue, nerves or vessels may cause serious disability.

Meningiomas occur more commonly in women and are often discovered at older ages, but they may occur at any age.

Because most meningiomas grow slowly, often without any significant signs and symptoms, they do not always require immediate treatment and may be monitored over time. 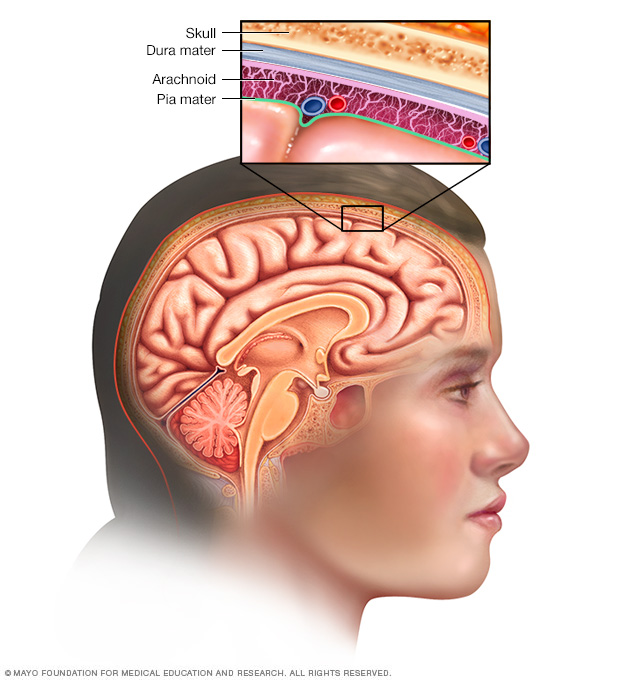 Signs and symptoms of a meningioma typically begin gradually and may be very subtle at first. Depending on where in the brain or, rarely, spine the tumor is situated, signs and symptoms may include:

Seek emergency care if you have:

Make an appointment to see your health care provider if you have persistent signs and symptoms that concern you, such as headaches that worsen over time.

In many cases, because meningiomas do not cause any noticeable signs or symptoms, they are only discovered as a result of imaging scans done for reasons that turn out to be unrelated to the tumor, such as a head injury, stroke or headaches.

It isn't clear what causes a meningioma. Doctors know that something alters some cells in your meninges to make them multiply out of control, leading to a meningioma tumor.

Whether this occurs because of genes you inherit, hormones (which may be related to the more frequent occurrence in women), the rare instance of prior exposure to radiation or other factors remains largely unknown. There is no solid evidence to support the belief that meningiomas occur because of cellphone use.

Risk factors for a meningioma include:

A meningioma and its treatment, typically surgery and radiation therapy, can cause long-term complications, including:

Your provider can treat some complications and refer you to specialists to help you cope with other complications.

A meningioma can be difficult to diagnose because the tumor is often slow growing. Symptoms of a meningioma may also be subtle and mistaken for other health conditions or written off as normal signs of aging.

If your provider suspects a meningioma, you may be referred to a doctor who specializes in neurological conditions (neurologist).

To diagnose a meningioma, a neurologist will conduct a thorough neurological exam followed by an imaging test with contrast dye, such as:

In some cases, examination of a sample of the tumor (biopsy) may be needed to rule out other types of tumors and confirm a meningioma diagnosis. 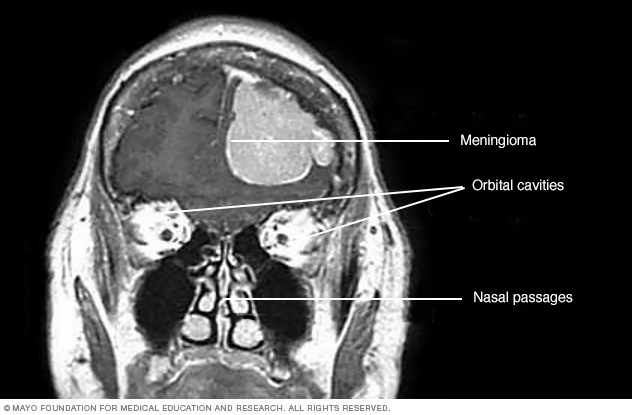 MRI scan of a person's head shows a meningioma. This meningioma has grown large enough to push down into the brain tissue." />

The treatment you receive for a meningioma depends on many factors, including:

Immediate treatment isn't necessary for everyone with a meningioma. A small, slow-growing meningioma that isn't causing signs or symptoms may not require treatment.

If the plan is not to undergo treatment for meningioma, you'll likely have brain scans periodically to evaluate your meningioma and look for signs that it's growing.

If your provider determines the meningioma is growing and needs to be treated, you have several treatment options.

If the meningioma causes signs and symptoms or shows signs that it's growing, your provider may recommend surgery.

The type of treatment, if any, you need after surgery depends on several factors.

If the meningioma can't be completely removed surgically, your provider may recommend radiation therapy following or instead of surgery.

Drug therapy (chemotherapy) is rarely used to treat meningiomas, but it may be used in cases that don't respond to surgery and radiation.

There isn't a widely accepted chemotherapy approach to the treatment of meningiomas, but researchers are currently studying other targeted approaches.

Alternative medicine treatments aren't typically effective in the treatment of meningioma, but some may help provide relief from treatment side effects or help you cope with the stress of having a meningioma.

Alternative medicine therapies that may be helpful include:

Discuss options with your provider.

Being diagnosed with a meningioma can be overwhelming. As you come to terms with your diagnosis, your life can be turned upside down with visits to doctors and surgeons as you prepare for your treatment. To help you cope, try to:

You're likely to start by seeing your primary provider. If your provider suspects that you may have a brain tumor, such as a meningioma, you may be referred to specialists who treat brain disorders (neurologists and neurosurgeons).

Preparing a list of questions will help you make the most of your time with your provider. For a meningioma, some basic questions to ask your provider include:

Don't hesitate to ask any other questions you have as well.