Meningitis is an infection and inflammation of the fluid and membranes surrounding the brain and spinal cord. These membranes are called meninges.

The inflammation from meningitis typically triggers symptoms such as headache, fever and a stiff neck.

Seek immediate medical care if you suspect that you or someone in your family has meningitis. Early treatment of bacterial meningitis can prevent serious complications.

Early meningitis symptoms may be similar to the flu. Symptoms may develop over several hours or over a few days.

Possible symptoms in anyone older than the age of 2 years include:

Newborns and infants may show these signs:

Infants with meningitis may be hard to comfort. They may even cry harder when held.

Seek immediate medical care if you or someone in your family has meningitis symptoms, such as:

Bacterial meningitis is serious and can cause death within days without prompt antibiotic treatment. Delayed treatment also increases the risk of permanent brain damage.

It's also important to talk to your health care provider if you've been exposed to someone with meningitis. That may include a family member or someone you live or work with. You may need to take medicines to prevent getting an infection.

Bacteria that enter the bloodstream and travel to the brain and spinal cord cause bacterial meningitis. But bacterial meningitis also can occur when bacteria directly invade the meninges. This may be caused by an ear or sinus infection, a skull fracture, or — rarely — some surgeries.

Several strains of bacteria can cause bacterial meningitis, most commonly:

Viral meningitis is usually mild and often clears on its own. Most cases in the United States are caused by a group of viruses known as enteroviruses. They're most common in late summer and early fall. Viruses such as herpes simplex virus, HIV, mumps virus, West Nile virus and others also can cause viral meningitis.

Chronic meningitis — one that's long-lasting — can be caused by slow-growing organisms such as fungi and Mycobacterium tuberculosis. They invade the membranes and fluid surrounding the brain. Chronic meningitis develops over two weeks or more. Symptoms are similar to acute meningitis, which is a sudden, new case. They include headache, fever, vomiting and mental cloudiness.

Fungal meningitis isn't common in the United States. It may mimic acute bacterial meningitis. It's often contracted by breathing in fungal spores that may be found in soil, decaying wood and bird droppings.

Fungal meningitis isn't spread from person to person. Cryptococcal meningitis is a common fungal form of the disease. It affects people with weakened immune systems, such as from AIDS. It can cause death if not treated with an antifungal medicine. Even with treatment, fungal meningitis may come back.

Parasites can cause a rare type of meningitis called eosinophilic meningitis. Parasitic meningitis also can be caused by a tapeworm infection in the brain or cerebral malaria. Amoebic meningitis is a rare type that is sometimes contracted through swimming in fresh water and can quickly become life-threatening.

The main parasites that cause meningitis typically infect animals. People are usually infected by eating foods contaminated with these parasites. Parasitic meningitis isn't spread between people.

Meningitis also can result from noninfectious causes. They include chemical reactions, drug allergies, some types of cancer and inflammatory diseases such as sarcoidosis. 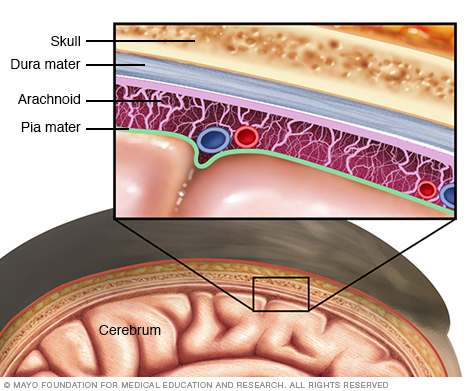 Risk factors for meningitis include:

Meningitis complications can be severe. The longer you or your child has the disease without treatment, the greater the risk of seizures and permanent neurological damage, including:

With prompt treatment, even people with severe meningitis can have good recovery.

Common bacteria or viruses that can cause meningitis can spread through coughing, sneezing, kissing, or sharing eating utensils, a toothbrush or a cigarette.

These steps can help prevent meningitis:

Some forms of bacterial meningitis are preventable with the following vaccinations:

A health care provider can diagnose meningitis based on a medical history, a physical exam and certain tests. During the exam, your provider may check for signs of infection around the head, ears, throat and skin along the spine.

Common tests to diagnose meningitis include:

The treatment depends on the type of meningitis you or your child has.

Acute bacterial meningitis must be treated right away with intravenous antibiotics and sometimes corticosteroids. This helps to ensure recovery and reduce the risk of complications, such as brain swelling and seizures.

The antibiotic or combination of antibiotics depends on the type of bacteria causing the infection. Your health care provider may recommend a broad-spectrum antibiotic until the exact cause of the meningitis is known.

Your provider may drain any infected sinuses or mastoids — the bones behind the outer ear that connect to the middle ear.

Your health care provider may prescribe corticosteroids to reduce swelling in the brain and a medicine to control seizures. If a herpes virus caused your meningitis, an antiviral medicine is available.

Other types of meningitis

If the cause of your meningitis is unknown, you may start antiviral and antibiotic treatment while the cause is determined.

Treatment for chronic meningitis is based on the underlying cause. Antifungal medicines treat fungal meningitis. A combination of specific antibiotics can treat tuberculous meningitis. However, these medicines can have serious side effects, so treatment may be deferred until a laboratory can confirm that the cause is fungal.

Noninfectious meningitis due to allergic reaction or autoimmune disease may be treated with corticosteroids. In some cases, no treatment may be required because the condition can resolve on its own. Cancer-related meningitis requires therapy for the specific cancer.

Meningitis can lead to death, depending on the cause. If you've been exposed to bacterial meningitis and you develop symptoms, go to an emergency room and tell the health care providers that you may have meningitis.

If you're not sure what you have and you call your provider for an appointment, here's how to prepare for your visit.

For meningitis, some basic questions to ask your health care provider include:

Your health care provider is likely to ask you a number of questions, such as:

When you call your health care provider's office for an appointment, describe the type and severity of your symptoms. If your provider says you don't need to come in immediately, rest as much as possible while you're waiting for your appointment.

Drink plenty of fluids and take acetaminophen (Tylenol, others) to reduce your fever and body aches. Also avoid any medicines that may make you less alert. Don't go to work or school.