Mild cognitive impairment (MCI) is the stage between the expected decline in memory and thinking that happens with age and the more serious decline of dementia. MCI may include problems with memory, language or judgment.

People with MCI may be aware that their memory or mental function has "slipped." Family and close friends also may notice changes. But these changes aren't bad enough to impact daily life or affect usual activities.

MCI may increase the risk of dementia caused by Alzheimer's disease or other brain disorders. But some people with mild cognitive impairment might never get worse. And some eventually get better.

The brain, like the rest of the body, changes with age. Many people notice they become more forgetful as they age. It may take longer to think of a word or to recall a person's name.

If concerns with mental function go beyond what's expected, the symptoms may be due to mild cognitive impairment (MCI). MCI may be the cause of changes in thinking if:

If you have MCI, you also may experience:

Talk to your health care provider if you or someone close to you notices you're having problems with memory or thinking. This may include trouble recalling recent events or having trouble thinking clearly.

MCI often involves the same types of brain changes seen in Alzheimer's disease or other forms of dementia. In MCI, those changes occur at a lesser degree. Some of these changes have been seen in autopsy studies of people with MCI.

Brain-imaging studies show that the following changes may be associated with MCI: 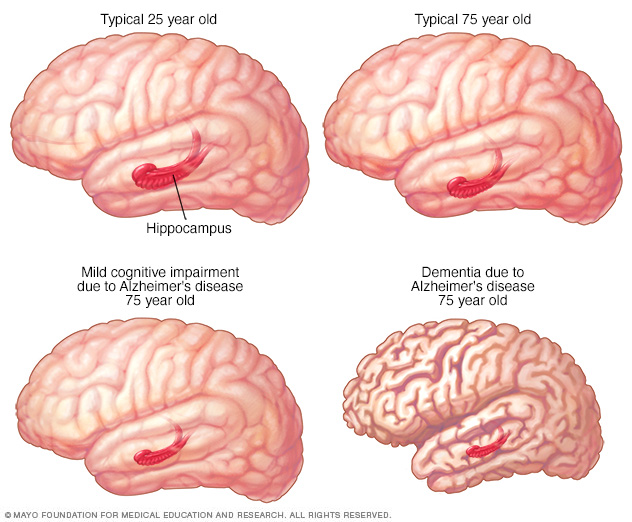 The strongest risk factors for MCI are:

Other medical conditions and lifestyle factors have been linked to an increased risk of changes in thinking, including:

Mild cognitive impairment can't be prevented. But research has found some lifestyle factors may lower the risk of getting MCI. Studies show that these steps may help prevent MCI:

No one test can confirm that someone has mild cognitive impairment (MCI). A diagnosis is made based on the information you provide and results of tests that can help clarify the diagnosis.

Many health care providers diagnose MCI based on criteria developed by a panel of international experts:

As part of a physical exam, a health care provider may perform some basic tests that can reveal how well the brain and nervous system are working. These tests can help detect signs of Parkinson's disease, strokes, tumors or other medical conditions that can impair memory and physical function.

The neurological exam may test:

Blood tests can help rule out physical problems that may affect memory. This can include not enough vitamin B-12 or thyroid hormone.

An MRI or CT scan can check for a brain tumor, stroke or bleeding.

Short forms of mental status testing can be done in about 10 minutes. The test will ask to name the date and follow written instructions.

Longer forms of tests can provide details about how someone's mental function compares with others of a similar age and education. These tests also may help identify patterns of change that offer clues about the cause of symptoms.

Mild cognitive impairment is an active area of research. Clinical studies are being conducted to better understand the disorder and find treatments that may improve symptoms or prevent or delay dementia.

This medicine was approved in the United States because it removes amyloid plaques in the brain. However, the medicine has not been widely used because studies about its effectiveness at slowing cognitive decline were mixed and coverage is limited.

A phase 3 clinical trial found that the medicine slowed cognitive decline in people with early Alzheimer's disease by 27%. Lecanemab works by preventing amyloid plaques in the brain from clumping. This study was the largest so far to look at whether clearing clumps of amyloid plaques from the brain can slow the disease.

Lecanemab is under review by the FDA. Another study is looking at how effective the medicine may be for people at risk of Alzheimer's disease, including people who have a first-degree relative, such as a parent or sibling, with the disease.

Other common conditions besides MCI can make you feel forgetful or less mentally sharp than usual. Treating these conditions can help improve your memory and overall mental function. Conditions that can affect memory include:

Study results have been mixed about whether diet, exercise or other healthy lifestyle choices can prevent or reverse cognitive decline. Regardless, these healthy choices promote good overall health and may play a role in good cognitive health.

Some supplements — including vitamin E, ginkgo and others — have been suggested to help prevent or delay mild cognitive impairment. However, more research is needed in this area. Talk to your health care provider before taking supplements as they can interact with your current medicines.

You're likely to start by seeing your primary care provider. If your provider suspects that you have cognitive changes, you may be referred to a specialist. This specialist may be a neurologist, psychiatrist or neuropsychologist.

Because appointments can be brief and there's often a lot to talk about, it's good to be well prepared. Here are some ideas to help you get ready for your appointment and know what to expect from your provider.

Because time with your health care provider is limited, writing down a list of questions will help you make the most of your appointment. List your questions from most pressing to least important in case time runs out. For cognitive changes, some questions to ask your provider include:

In addition to the questions you've prepared ahead of time, don't hesitate to ask your health care provider to clarify anything you don't understand.

Your provider also is likely to have questions for you. Being ready to respond may free up time to focus on any points you want to talk about in-depth. Your provider may ask: