Osteosarcoma is a type of bone cancer that begins in the cells that form bones. Osteosarcoma is most often found in the long bones — more often the legs, but sometimes the arms — but it can start in any bone. In very rare instances, it occurs in soft tissue outside the bone.

Osteosarcoma tends to occur in teenagers and young adults, but it can also occur in younger children and older adults.

Treatment usually involves chemotherapy, surgery and, sometimes, radiation therapy. Doctors select treatment options based on where the osteosarcoma starts, the size of the cancer, the type and grade of the osteosarcoma, and whether the cancer has spread beyond the bone.

Treatment innovations for osteosarcoma have greatly improved the outlook (prognosis) for this cancer over the years. After completion of treatment, lifelong monitoring is recommended to watch for potential late effects of intense treatments. 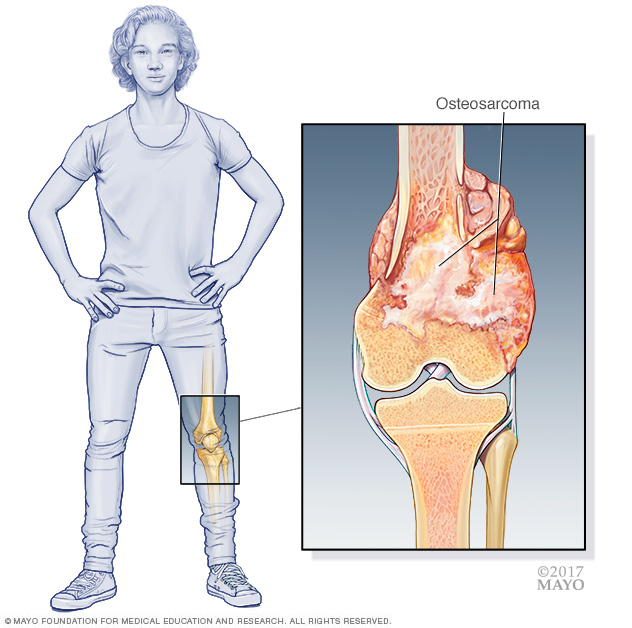 Signs and symptoms of osteosarcoma may include, among others:

Make an appointment with your child's doctor if your child has any persistent signs and symptoms that worry you. Osteosarcoma symptoms are similar to many more-common conditions, such as sports injuries, so your doctor may investigate those causes first.

It's not clear what causes osteosarcoma. Doctors know this cancer forms when something goes wrong in one of the cells that are responsible for making new bone.

Osteosarcoma begins when a healthy bone cell develops changes in its DNA. A cell's DNA contains the instructions that tell a cell what to do. The changes tell the cell to start making new bone when it isn't needed. The result is a mass (tumor) of poorly formed bone cells that can invade and destroy healthy body tissue. Cells can break away and spread (metastasize) throughout the body.

These factors increase the risk of osteosarcoma:

Complications of osteosarcoma and its treatment include:

To diagnose osteosarcoma, the doctor may begin with a physical exam to better understand the symptoms.

Imaging tests help your doctor investigate your bone symptoms, look for cancer and look for signs that the cancer has spread.

Imaging tests may include:

Removing a sample of cells for testing (biopsy)

A biopsy procedure is used to collect a sample of suspicious cells for laboratory testing. Tests can show whether the cells are cancerous. Lab tests can determine the type of cancer and whether it's aggressive (the grade).

Types of biopsy procedures used to diagnose osteosarcoma include:

Determining the type of biopsy needed and the specifics of how it should be performed requires careful planning by the medical team. Doctors need to perform the biopsy in a way that won't interfere with future surgery to remove the cancer. For this reason, ask your doctor for a referral to a team of experts with extensive experience in treating osteosarcoma before the biopsy.

Osteosarcoma treatment typically involves surgery and chemotherapy. Radiation therapy might be an option in certain situations.

The goal of surgery is to remove all of the cancer cells. But planning the operation also takes into consideration how it will affect your ability to go about your daily life. The extent of surgery for osteosarcoma depends on several factors, such as the size of the tumor and its location.

Operations used to treat osteosarcoma include:

Chemotherapy uses drugs to kill cancer cells. Chemotherapy treatment usually combines two or more drugs that can be administered as an infusion into a vein (IV), in pill form, or through both methods.

For osteosarcoma, chemotherapy is often recommended before surgery (neoadjuvant therapy). Doctors monitor how the cancer cells respond to the chemotherapy in order to plan further treatments.

If the osteosarcoma shrinks in response to the chemotherapy, it may make limb-sparing surgery possible.

If the osteosarcoma doesn't respond to treatment, it may indicate the cancer is very aggressive. Doctors may recommend a different combination of chemotherapy drugs or suggest a more aggressive operation to ensure all the cancer is removed.

Chemotherapy can also be used after surgery to kill any cancer cells that might remain.

If osteosarcoma returns after surgery or spreads to other areas of the body, chemotherapy might be recommended to try to slow the growth of the disease.

Radiation therapy uses high-energy beams, such as X-rays and protons, to kill cancer cells. Radiation might be an option in certain situations, such as when surgery isn't possible or if surgeons can't remove all of the cancer during an operation.

During radiation therapy, the beams of energy are delivered from a machine that moves around you as you lie on a table. The beams are carefully directed to the area of the osteosarcoma in order to reduce the risk of damage to surrounding healthy cells.

Clinical trials are studies to investigate new ways of treating cancer. Ask your doctor or your child's doctor about whether you may be eligible to join a trial.

A diagnosis of osteosarcoma can be frightening. With time you'll find ways to cope with the distress and uncertainty of cancer. Until then, you may find it helps to:

If there are signs and symptoms that worry you, you'll likely start by making an appointment with your primary care doctor — or the pediatrician if the concern is with your child. If your doctor suspects osteosarcoma, ask for a referral to an experienced specialist.

Osteosarcoma typically needs to be treated by a team of specialists, which may include, for example:

Whether you're the patient or your child is the patient, your questions might include, for example:

Your doctor will likely ask several questions. Be ready to answer them to allow more time to cover other points you want to address. Whether you're the patient or your child is the patient, the doctor may ask: