Placental abruption (abruptio placentae) is an uncommon yet serious complication of pregnancy. The placenta develops in the uterus during pregnancy. It attaches to the wall of the uterus and supplies the baby with nutrients and oxygen.

Placental abruption occurs when the placenta partly or completely separates from the inner wall of the uterus before delivery. This can decrease or block the baby's supply of oxygen and nutrients and cause heavy bleeding in the mother.

Placental abruption often happens suddenly. Left untreated, it endangers both the mother and the baby. 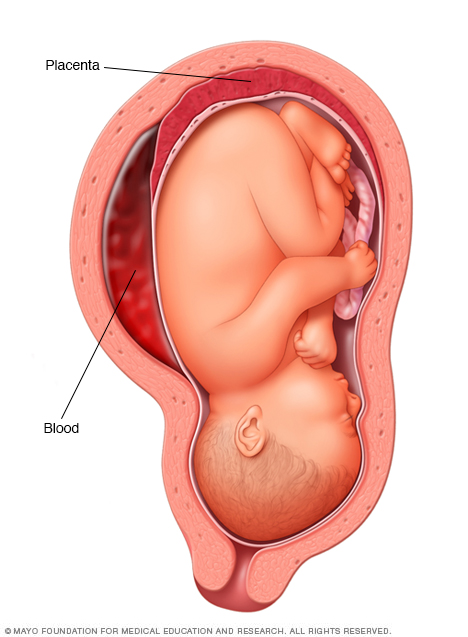 Abdominal pain and back pain often begin suddenly. The amount of vaginal bleeding can vary greatly, and doesn't necessarily indicate how much of the placenta has separated from the uterus. It's possible for the blood to become trapped inside the uterus, so even with a severe placental abruption, there might be no visible bleeding.

In some cases, placental abruption develops slowly (chronic abruption), which can cause light, intermittent vaginal bleeding. Your baby might not grow as quickly as expected, and you might have low amniotic fluid or other complications.

Seek emergency care if you have signs or symptoms of placental abruption.

The cause of placental abruption is often unknown. Possible causes include trauma or injury to the abdomen — from an auto accident or fall, for example — or rapid loss of the fluid that surrounds and cushions the baby in the uterus (amniotic fluid).

Factors that can increase the risk of placental abruption include:

Placental abruption can cause life-threatening problems for both mother and baby.

For the mother, placental abruption can lead to:

For the baby, placental abruption can lead to:

You can't prevent placental abruption, but you can decrease certain risk factors. For example, don't smoke or use illegal drugs, such as cocaine. If you have high blood pressure, work with your health care provider to monitor the condition.

Always wear your seatbelt when in a motor vehicle. If you've had abdominal trauma — from an auto accident, fall or other injury — seek immediate medical help.

If you've had a placental abruption, and you're planning another pregnancy, talk to your health care provider before you conceive to see if there are ways to reduce the risk of another abruption.

If your health care provider suspects placental abruption, he or she will do a physical exam to check for uterine tenderness or rigidity. To help identify possible sources of vaginal bleeding, your provider will likely recommend blood and urine tests and ultrasound.

During an ultrasound, high-frequency sound waves create an image of your uterus on a monitor. It's not always possible to see a placental abruption on an ultrasound, however.

It isn't possible to reattach a placenta that's separated from the wall of the uterus. Treatment options for placental abruption depend on the circumstances:

For severe bleeding, you might need a blood transfusion.

Placental abruption is often a medical emergency, leaving you no time to prepare. However, it's possible that your health care provider might notice signs of a coming abruption.

If you and the baby are being monitored in the hospital, here's some information to help you prepare for what's to come.

While you're in the hospital:

Some questions you might want to ask your doctor include:

Your doctor is likely to ask you questions, including: