Porphyria (por-FEAR-e-uh) refers to a group of disorders that result from a buildup of natural chemicals that produce porphyrin in your body. Porphyrins are essential for the function of hemoglobin — a protein in your red blood cells that links to porphyrin, binds iron, and carries oxygen to your organs and tissues. High levels of porphyrins can cause significant problems.

Signs and symptoms of porphyria vary, depending on the specific type and severity. Porphyria is usually inherited — one or both parents pass along an abnormal gene to their child.

Although porphyria can't be cured, certain lifestyle changes to avoid triggering symptoms may help you manage it. Treatment for symptoms depends on the type of porphyria you have.

Symptoms of porphyria can vary widely in severity, by type and among individuals. Some people with the gene mutations that cause porphyria never have any symptoms.

Acute porphyrias include forms of the disease that typically cause nervous system symptoms, which appear quickly and can be severe. Symptoms may last days to weeks and usually improve slowly after the attack. Acute intermittent porphyria is the common form of acute porphyria.

Signs and symptoms of acute porphyria may include:

Cutaneous porphyrias include forms of the disease that cause skin symptoms as a result of sensitivity to sunlight, but these forms don't usually affect your nervous system. Porphyria cutanea tarda (PCT) is the most common type of all the porphyrias.

As a result of sun exposure, you may experience:

Many signs and symptoms of porphyria are similar to those of other, more common conditions. This can make it difficult to know if you're having an attack of porphyria. If you have any of the above symptoms, seek medical attention.

All types of porphyria involve a problem in the production of heme. Heme is a component of hemoglobin, the protein in red blood cells that carries oxygen from your lungs to all parts of your body. Heme production, which occurs in the bone marrow and liver, involves eight different enzymes — a shortage (deficiency) of a specific enzyme determines the type of porphyria.

In cutaneous porphyria, the porphyrins build up in the skin, and when exposed to sunlight, cause symptoms. In acute porphyrias, the buildup damages the nervous system.

Most forms of porphyria are inherited. Porphyria can occur if you inherit:

Just because you inherit a gene or genes that can cause porphyria doesn't mean that you'll have signs and symptoms. You might have what's called latent porphyria, and never have symptoms. This is the case for most carriers of the abnormal genes.

Porphyria cutanea tarda (PCT) typically is acquired rather than inherited, although the enzyme deficiency may be inherited. Certain triggers that impact enzyme production — such as too much iron in the body, liver disease, estrogen medication, smoking or excessive alcohol use — can cause symptoms. 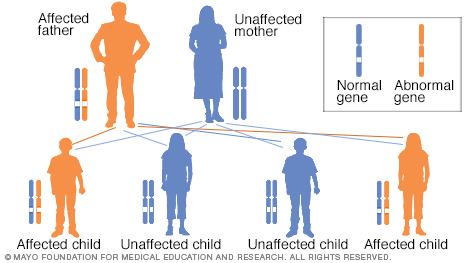 In addition to genetic risks, environmental factors may trigger the development of signs and symptoms in porphyria. When exposed to the trigger, your body's demand for heme production increases. This overwhelms the deficient enzyme, setting in motion a process that causes a buildup of porphyrins.

Examples of triggers include:

Possible complications depend on the form of porphyria:

Although there's no way to prevent porphyria, if you have the disease, avoid triggers to help prevent symptoms.

Because porphyria is usually an inherited disorder, your siblings and other family members may want to consider genetic testing to determine if they have the disease, and get genetic counseling if needed.

Many signs and symptoms of porphyria are similar to those of other more common diseases. Also, because porphyria is rare, it can be more difficult to diagnose.

Lab tests are required to make a definitive diagnosis of porphyria and to determine which form of the disease you have. Different tests are performed depending on the type of porphyria your doctor suspects. Tests include a combination of blood, urine or stool testing.

More tests may be needed to confirm the type of porphyria you have. Genetic testing and counseling may be recommended in the family of a person with porphyria.

Treatment depends on the type of porphyria you have and the severity of symptoms. Treatment includes identifying and avoiding symptom triggers and then relieving symptoms when they occur.

Avoiding triggers may include:

Treatment of acute porphyria attacks focuses on providing rapid treatment of symptoms and preventing complications. Treatment may include:

In 2019, the FDA approved givosiran (Givlaari) as a monthly injection for adults with acute hepatic porphyria to reduce the number of porphyria attacks. But it’s important to discuss safety information and potential serious side effects with your doctor. These include but are not limited to nausea, liver and kidney toxicity, and a small risk of anaphylaxis.

Treatment of cutaneous porphyrias focuses on reducing exposure to triggers such as sunlight and reducing the amount of porphyrins in your body to help eliminate your symptoms. This may include:

If you have porphyria:

Porphyria is considered a chronic illness, as the underlying cause can't be cured. However, porphyria usually can be managed by treatment and lifestyle changes so that you can live a full and healthy life.

If you have signs and symptoms of porphyria, you're likely to start by seeing your primary care provider. However, because porphyria can be difficult to diagnose, you may be referred to a doctor who specializes in blood disorders (hematologist).

Here's some information to help you get ready, and what to expect from your doctor.

Questions to ask your doctor may include:

Don't hesitate to ask other questions during your appointment.

Your doctor is likely to ask you several questions. Be ready to answer them to spend time on areas you want to focus on. Some questions your doctor may ask include: