A prolactinoma isn't life-threatening. But it can cause vision difficulties, infertility and other problems. Prolactinoma is the most common type of hormone-producing tumor that can develop in the pituitary gland.

A prolactinoma can usually be treated with medications to bring the prolactin level down into the standard range and shrink the tumor. In some cases, surgery to remove the tumor might be an option. 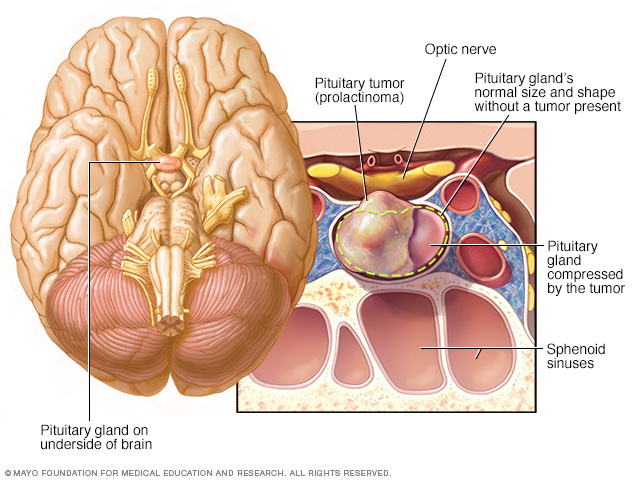 A prolactinoma might not cause any signs or symptoms. However, too much prolactin in your blood (hyperprolactinemia) can cause symptoms. So can pressure on surrounding tissues from a large tumor.

Because too much prolactin can disrupt the reproductive system (hypogonadism), some of the signs and symptoms of a prolactinoma are specific to females or males.

In females, prolactinoma can cause:

In males, prolactinoma can cause:

In both females and males, prolactinoma can cause:

Pressure from tumor growth can cause:

If you develop signs and symptoms that may be caused by a prolactinoma, see your health care provider to determine the cause.

If you have a prolactinoma and you want to become or are already pregnant, talk to your health care provider. Adjustments in your treatment and monitoring may be necessary.

The pituitary gland is a small bean-shaped gland located at the base of your brain. Despite its small size, the pituitary gland has an effect on nearly every part of your body. Its hormones help control important functions such as growth, metabolism, blood pressure and reproduction.

A prolactinoma causes the pituitary gland to make too much of a hormone called prolactin. This results in a decreased level of some sex hormones — namely, estrogen and testosterone.

Making too much prolactin (hyperprolactinemia) can also happen for reasons other than a prolactinoma. These can include: 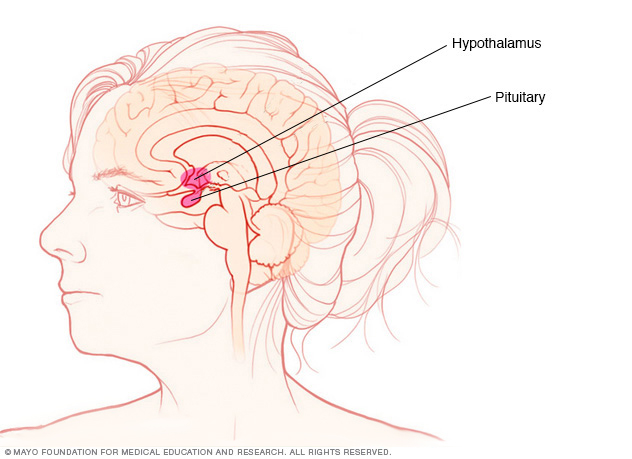 More prolactinomas occur in females than males. The disorder is rare in children.

Rarely, an inherited disorder such as multiple endocrine neoplasia, type 1 — a disorder that causes tumors in hormone-producing glands — may increase the risk of a prolactinoma.

Complications of prolactinoma may include:

If you have signs and symptoms that suggest you have a prolactinoma, your health care provider may recommend:

Your provider may also refer you for additional testing with a specialist in treating disorders that affect the endocrine glands and hormones (endocrinologist).

Goals in the treatment of a prolactinoma include:

For most people, treatment can eliminate or improve:

Oral medications known as dopamine agonists are generally used to treat a prolactinoma. These drugs mimic the effects of dopamine — the brain chemical that controls how much prolactin is made. Dopamine agonists can decrease the production of prolactin and shrink the size of the tumor. Drugs can eliminate symptoms for most people with prolactinomas. However, you'll generally need long-term treatment with drugs.

If a drug shrinks the tumor significantly and your prolactin level remains within the standard range for two years, you may be able to taper off the drug. Only taper off your drug with your health care provider's guidance. Your provider monitors your prolactin levels during this process. Don't stop taking your drug without talking to your provider first.

Prolactin levels commonly rise after stopping the drug. If this happens, your provider will likely ask you to restart taking the drug.

Common side effects of these medications include nausea and vomiting, dizziness, nasal stuffiness, and headache. However, these side effects often can be less bothersome if your health care provider starts you with a very low dose of the drug. Then your provider can gradually increase the dose. It may also help if you take the drug with food or if you take it at bedtime.

People have rarely had heart valve damage with cabergoline. But it's usually in people taking much higher doses for Parkinson's disease. Some people may develop impulse control disorders, such as compulsive gambling, while taking these drugs.

Both bromocriptine and cabergoline treat prolactinomas in people who want to become pregnant. But the medications have different advantages and disadvantages. Discuss the pros and cons of these options with your health care provider. Together you can decide which drug may work best for you.

In most situations, a provider typically advises stopping the drug when pregnancy is confirmed. Although both drugs are considered safe in pregnancy, your provider will generally recommend avoiding any drug during pregnancy when possible. However, if you have a large prolactinoma or you develop signs and symptoms such as headaches or vision changes, your provider may recommend that you restart the drug. This can prevent further tumor growth and complications.

If you're being treated for a prolactinoma and you'd like to start a family, it's best to discuss your options with your provider before you become pregnant.

Surgery to remove a prolactinoma is generally an option if drug therapy doesn't work or you can't tolerate the drug. Surgery may be necessary to relieve pressure on the nerves that control your vision.

The type of surgery you have will depend largely on the size and extent of your tumor:

Surgery outcomes depend on the size and location of the tumor and prolactin levels before surgery. The surgeon's skill and experience with this specific type of surgery also is a factor. Sometimes an MRI scan shows that a prolactinoma has extended to areas in the brain where it's unsafe to attempt removal. When this happens, the surgeon can only partially remove the prolactinoma.

Rarely, radiation therapy to kill tumor cells may be an option for a large prolactinoma. You may have radiation if you don't respond to medication, if you aren't able to have surgery, or if your surgery didn't remove all of a large tumor.

You'll likely start by seeing your family health care provider. You may then be referred to a specialist in disorders that affect the endocrine glands and hormones (endocrinologist).

Before your appointment, you may want to make a list of:

Basic questions to ask may include:

Don't hesitate to ask any other questions during your appointment.

Your provider is likely to ask you questions, including:

Preparing to answer questions can help you make the most of your appointment time.