Because one or more clots block blood flow to the lungs, pulmonary embolism can be life-threatening. However, prompt treatment greatly reduces the risk of death. Taking measures to prevent blood clots in your legs will help protect you against pulmonary embolism. 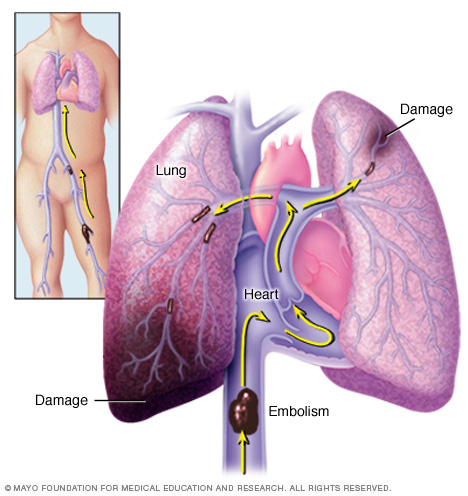 Pulmonary embolism symptoms can vary greatly, depending on how much of your lung is involved, the size of the clots, and whether you have underlying lung or heart disease.

Other symptoms that can occur with pulmonary embolism include:

A pulmonary embolism can be life-threatening. Seek urgent medical attention if you experience unexplained shortness of breath, chest pain or fainting.

A pulmonary embolism occurs when a clump of material, most often a blood clot, gets stuck in an artery in the lungs, blocking the flow of blood. Blood clots most commonly come from the deep veins of your legs, a condition known as deep vein thrombosis.

In many cases, multiple clots are involved. The portions of lung served by each blocked artery can't get blood and may die. This is known as a pulmonary infarction. This makes it more difficult for your lungs to provide oxygen to the rest of your body.

Occasionally, blockages in the blood vessels are caused by substances other than blood clots, such as:

Although anyone can develop blood clots that result in a pulmonary embolism, certain factors can increase your risk.

You're at a higher risk if you or any of your blood relatives, such as a parent or sibling, have had venous blood clots or a pulmonary embolism in the past.

Some medical conditions and treatments put you at risk, such as:

Blood clots are more likely to form during longer than usual periods of inactivity, such as: 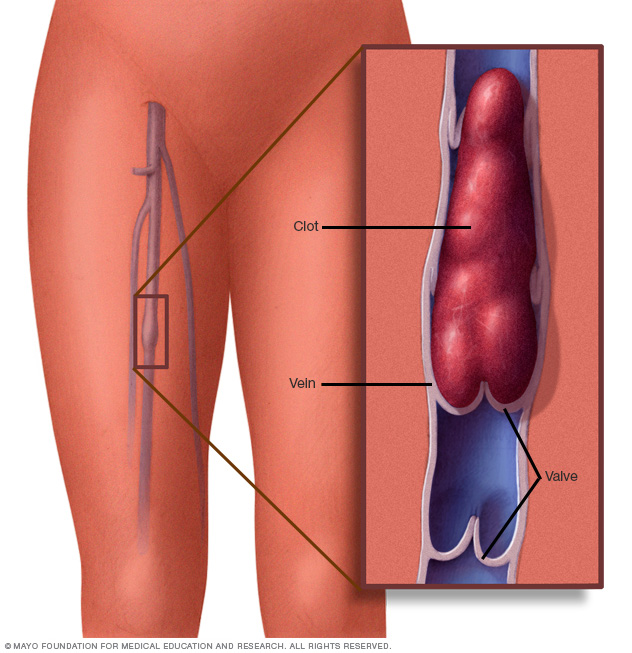 Pulmonary embolisms also can lead to pulmonary hypertension, a condition in which the blood pressure in the lungs and in the right side of the heart is too high. When you have blockages in the arteries inside your lungs, your heart must work harder to push blood through those vessels. This increases blood pressure and eventually weakens your heart.

In rare cases, small clots called emboli remain in the lungs and scarring develops in the pulmonary arteries over time. This restricts blood flow and results in chronic pulmonary hypertension.

Preventing clots in the deep veins in your legs will help prevent pulmonary embolisms. For this reason, most hospitals are aggressive about taking measures to prevent blood clots, including:

The risk of blood clots developing while traveling is low but increases as long-haul travel increases. If you have risk factors for blood clots and you're concerned about travel, talk with your health care provider.

Your provider might suggest the following to help prevent blood clots during travel:

A pulmonary embolism can be difficult to diagnose, especially if you have underlying heart or lung disease. For that reason, your health care provider will likely discuss your medical history, do a physical exam, and order tests that may include one or more of the following.

Your health care provider may order a blood test for the clot-dissolving substance D dimer. High levels may suggest an increased likelihood of blood clots, although many other factors can cause high D dimer levels.

In addition, blood tests may be done to determine whether you have an inherited clotting disorder.

A noninvasive test known as duplex ultrasonography, sometimes called a duplex scan or compression ultrasonography, uses sound waves to scan veins to check for deep vein blood clots. This test can look at veins in the thigh, knee and calf, and sometimes the arms.

A wand-shaped device called a transducer is moved over the skin, directing the sound waves to the veins being tested. These waves are then reflected back to the transducer to create a moving image on a computer. The absence of clots reduces the likelihood of deep vein thrombosis. If clots are present, treatment likely will be started immediately.

CT scanning generates X-rays to produce cross-sectional images of your body. CT pulmonary angiography — also called a CT pulmonary embolism study — creates 3D images that can find changes such as a pulmonary embolism within the arteries in your lungs. In some cases, contrast material is given through a vein in the hand or arm during the CT scan to outline the pulmonary arteries.

When there is a need to avoid radiation exposure or contrast from a CT scan due to a medical condition, a V/Q scan may be done. In this test, a small amount of a radioactive substance called a tracer is injected into a vein in your arm. The tracer maps blood flow, called perfusion, and compares it with the airflow to your lungs, called ventilation. This test can be used to see if blood clots are causing symptoms of pulmonary hypertension.

This test provides a clear picture of the blood flow in the arteries of your lungs. It's the most accurate way to diagnose a pulmonary embolism. But because it requires a high degree of skill to perform and has potentially serious risks, it's usually done when other tests fail to provide a definite diagnosis.

In a pulmonary angiogram, a thin, flexible tube called a catheter is inserted into a large vein — usually in your groin — and threaded through your heart and into the pulmonary arteries. A special dye is then injected into the catheter. X-rays are taken as the dye travels along the arteries in your lungs.

In some people, this procedure may cause a temporary change in heart rhythm. In addition, the dye may cause increased risk of kidney damage in people with reduced kidney function.

MRI is a medical imaging technique that uses a magnetic field and computer-generated radio waves to create detailed images of the organs and tissues in your body. MRI is usually only done in those who are pregnant ⸺ to avoid radiation to the baby ⸺ and in people whose kidneys may be harmed by dyes used in other tests.

Treatment of a pulmonary embolism focuses on keeping the blood clot from getting bigger and preventing new clots from forming. Prompt treatment is essential to prevent serious complications or death.

Treatment can include medicines, surgery and other procedures, and ongoing care.

Medicines include different types of blood thinners and clot dissolvers.

Surgical and other procedures

Because you may be at risk of another deep vein thrombosis or pulmonary embolism, it's important to continue treatment, such as remaining on anticoagulants and being monitored as often as suggested by your health care provider. Also, keep regular visits with your provider to prevent or treat complications.

You may want to prepare a list that includes:

During the physical exam, your health care provider will likely examine your legs for evidence of a deep vein clot — an area that's swollen, tender, red and warm. Your provider will also listen to your heart and lungs, check your blood pressure and likely order one or more tests.