Thrombocytopenia is a condition in which you have a low blood platelet count. Platelets (thrombocytes) are colorless blood cells that help blood clot. Platelets stop bleeding by clumping and forming plugs in blood vessel injuries.

Thrombocytopenia might occur as a result of a bone marrow disorder such as leukemia or an immune system problem. Or it can be a side effect of taking certain medications. It affects both children and adults.

Thrombocytopenia can be mild and cause few signs or symptoms. In rare cases, the number of platelets can be so low that dangerous internal bleeding occurs. Treatment options are available.

Thrombocytopenia signs and symptoms may include:

Make an appointment with your doctor if you have signs of thrombocytopenia that worry you.

Bleeding that won't stop is a medical emergency. Seek immediate help for bleeding that can't be controlled by the usual first-aid techniques, such as applying pressure to the area. 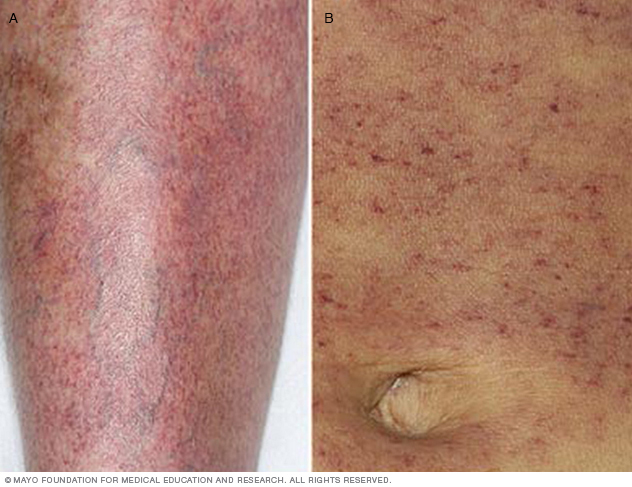 Thrombocytopenia means you have fewer than 150,000 platelets per microliter of circulating blood. Because each platelet lives only about 10 days, your body normally renews your platelet supply continually by producing new platelets in your bone marrow.

Thrombocytopenia rarely is inherited; or it can be caused by a number of medications or conditions. Whatever the cause, circulating platelets are reduced by one or more of the following processes: trapping of platelets in the spleen, decreased platelet production or increased destruction of platelets.

The spleen is a small organ about the size of your fist situated just below your rib cage on the left side of your abdomen. Normally, your spleen works to fight infection and filter unwanted material from your blood. An enlarged spleen — which can be caused by a number of disorders — can harbor too many platelets, which decreases the number of platelets in circulation.

Platelets are produced in your bone marrow. Factors that can decrease platelet production include:

Some conditions can cause your body to use up or destroy platelets faster than they're produced, leading to a shortage of platelets in your bloodstream. Examples of such conditions include:

Dangerous internal bleeding can occur when your platelet count falls below 10,000 platelets per microliter. Though rare, severe thrombocytopenia can cause bleeding into the brain, which can be fatal.

The following can be used to determine whether you have thrombocytopenia:

Your doctor might suggest other tests and procedures to determine the cause of your condition, depending on your signs and symptoms.

If your thrombocytopenia is caused by an underlying condition or a medication, addressing that cause might cure it. For example, if you have heparin-induced thrombocytopenia, your doctor can prescribe a different blood-thinning drug.

If you have thrombocytopenia, try to:

Start by seeing your primary care doctor, who can manage most cases of thrombocytopenia. In certain situations, he or she might refer you to a specialist in blood diseases (hematologist).

When you make the appointment, ask if there's anything you need to do in advance, such as restrict your diet.

Take along a family member or friend, if possible, to help you remember the information you receive.

For thrombocytopenia, questions to ask your doctor include: