Normal urine color ranges from pale yellow to deep amber — the result of a pigment called urochrome and how diluted or concentrated the urine is.

Pigments and other compounds in certain foods and medications can change your urine color. Beets, berries and fava beans are among the foods most likely to affect the color. Many over-the-counter and prescription medications give urine vivid tones, such as red, yellow or greenish blue.

An unusual urine color can be a sign of disease. For instance, deep red to brown urine is an identifying characteristic of porphyria, a rare, inherited disorder of red blood cells.

Normal urine color varies, depending on how much water you drink. Fluids dilute the yellow pigments in urine, so the more you drink, the clearer your urine looks. When you drink less, the color becomes more concentrated. Severe dehydration can produce urine the color of amber.

Seek medical attention if you have:

Discolored urine is often caused by medications, certain foods or food dyes. In some cases, though, changes in urine color can be caused by specific health problems.

Despite its alarming appearance, red urine isn't necessarily serious. Red or pink urine can be caused by:

Orange urine can result from:

Blue or green urine can be caused by:

Brown urine can result from:

Urinary tract infections and kidney stones can cause urine to appear cloudy or murky. 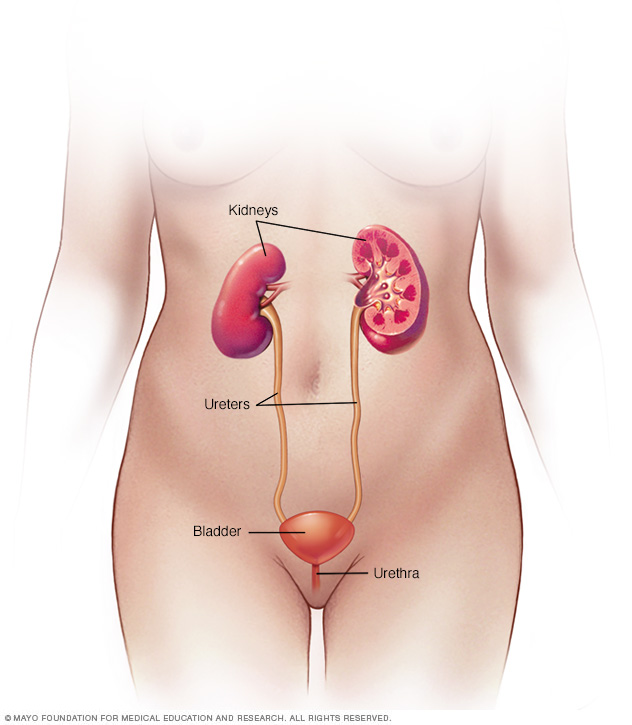 In addition to taking a thorough medical history and performing a physical exam, your doctor might recommend certain diagnostic tests, including:

Treatment, if needed, will depend on the condition that causes the change in urine color.

When you're dehydrated, your urine becomes more concentrated and darker in color. If this happens, it might mean you need more fluids. Make sure you drink enough fluids daily to stay hydrated and keep yourself healthy.

You'll likely start by seeing your primary care provider. In some cases, you might be referred to a doctor who specializes in urinary tract disorders (urologist).

When you make the appointment, ask if there's anything you need to do in advance to prepare for common diagnostic tests. Make a list of:

For urine color, questions to ask include: