Vocal cord paralysis is a condition in which you can't control the movement of the muscles that control your voice. It happens when the nerve impulses to your voice box (larynx) are disrupted. This results in paralysis of the vocal cord muscles.

Vocal cord paralysis can make it hard to speak and even breathe. That's because your vocal cords, also called vocal folds, do more than just produce sound. They also protect your airway by preventing food, drink and even your saliva from entering your windpipe (trachea) and causing you to choke.

Your vocal cords are two flexible bands of muscle tissue that sit at the entrance to the windpipe (trachea). When you speak, the bands come together and vibrate to make sound. The rest of the time, the vocal cords are relaxed in an open position so that you can breathe.

In most cases of vocal cord paralysis, only one vocal cord is paralyzed. Paralysis of both of your vocal cords is a rare but serious condition. This can cause difficulties with speech and significant problems with breathing and swallowing.

Signs and symptoms of vocal cord paralysis may include:

If you have unexplained hoarseness that lasts for more than 2 to 4 weeks, or if you notice any unexplained voice changes or discomfort, contact your health care provider. 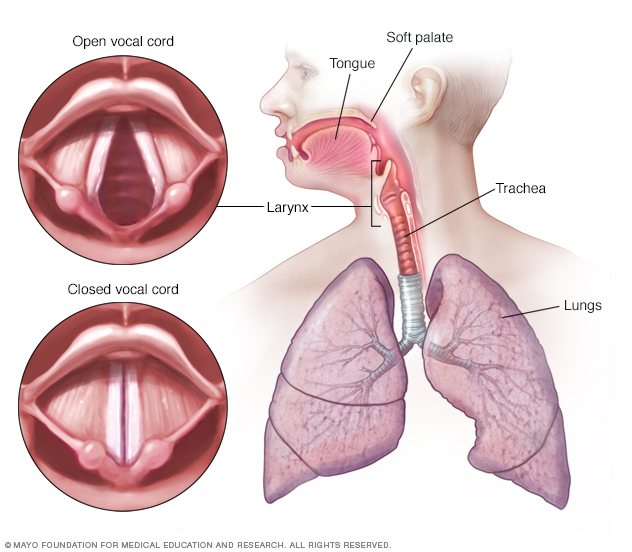 Factors that may increase your risk of developing vocal cord paralysis include:

Breathing problems associated with vocal cord paralysis may be so mild that you just have a hoarse-sounding voice, or they can be so serious that they're life-threatening.

Because vocal cord paralysis keeps the opening to the airway from completely opening or closing, other complications may include choking on or inhaling (aspirating) food or liquid. Aspiration that leads to severe pneumonia is rare but serious and requires immediate medical care.

Your health care provider likely asks about your symptoms and lifestyle, listens to your voice, and asks you how long you've had voice problems. To further evaluate your voice problems, the following tests may be performed:

Treatment of vocal cord paralysis depends on the cause, the severity of symptoms and the time from the onset of symptoms. Treatment may include voice therapy, bulk injections, surgery or a combination of treatments.

In some instances, you may get better without surgical treatment. For this reason, your health care provider may delay permanent surgery for at least a year from the beginning of your vocal cord paralysis.

However, surgical treatment with various bulk injections is often done within the first three months of voice loss.

During the waiting period for surgery, your provider may suggest voice therapy to help keep you from using your voice improperly while the nerves heal.

Voice therapy sessions involve exercises or other activities to strengthen your vocal cords, improve breath control during speech, prevent tension in other muscles around the paralyzed vocal cord or cords, and protect your airway during swallowing. Occasionally, voice therapy may be the only treatment you need if your vocal cords were paralyzed in a location that doesn't require additional bulk or repositioning.

If your vocal cord paralysis symptoms don't fully recover on their own, surgical treatments may be offered to improve your ability to speak and to swallow.

Linking the vocal cords to another source of electrical stimulation — perhaps a nerve from another part of the body or a device similar to a cardiac pacemaker — may restore opening and closing of the vocal cords that can't move. Researchers continue to study this and other options.

Vocal cord paralysis can be frustrating and affect your daily life. It can be hard to communicate with other people. A speech therapist can help you develop the skills you need to communicate.

Even if you're not able to get back the voice you once had, voice therapy can help you learn effective ways to make up for it. In addition, a speech-language pathologist can teach you how to use your voice without causing further damage to the vocal cords.

You're likely to first see your primary care provider unless both vocal cords are paralyzed. In that case, you'll probably first be seen in a hospital emergency department.

It's helpful to arrive well prepared for your appointment. Here's some information to help you get ready and what to expect from your care provider.

Your time with your health care provider may be limited. Preparing a list of questions can help you make the most of your time together. For vocal cord paralysis, some basic questions to ask your provider include:

Your health care provider is likely to ask you a number of questions, such as: