Vulvar cancer is a type of cancer that occurs on the outer surface area of the female genitalia. The vulva is the area of skin that surrounds the urethra and vagina, including the clitoris and labia.

Vulvar cancer commonly forms as a lump or sore on the vulva that often causes itching. Though it can occur at any age, vulvar cancer is most commonly diagnosed in older adults. 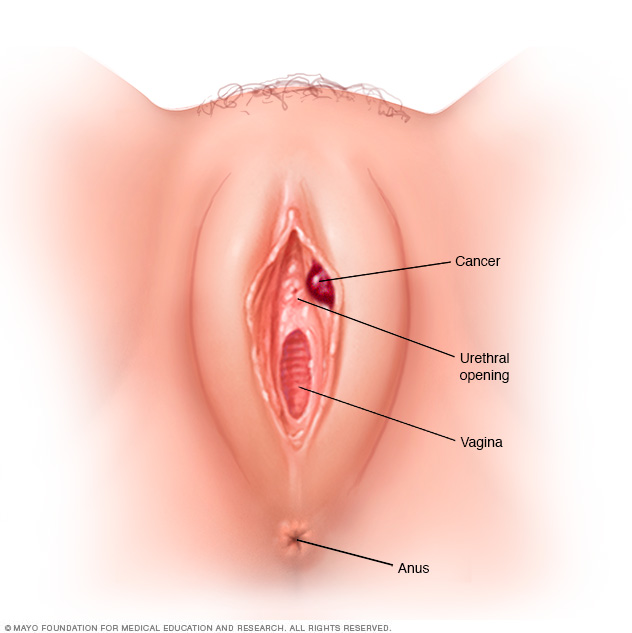 Signs and symptoms of vulvar cancer may include:

Make an appointment with your primary care doctor or gynecologist if you experience any persistent symptoms that worry you.

It's not clear what causes vulvar cancer.

In general, doctors know that cancer begins when a cell develops changes (mutations) in its DNA. The DNA contains the instructions that tell a cell what to do. The mutations tell the cell to grow and divide rapidly. The cell and its offspring go on living when other normal cells would die. The accumulating cells form a tumor that may be cancerous, invading nearby tissue and spreading to other parts of the body.

The type of cell in which vulvar cancer begins helps your doctor plan the most effective treatment. The most common types of vulvar cancer include:

Although the exact cause of vulvar cancer isn't known, certain factors appear to increase your risk of the disease, including:

Ask your doctor about pelvic exams

Talk to your doctor about your risk factors for vulvar cancer and other pelvic cancers in order to determine the most appropriate screening exam schedule for you.

Tests and procedures used to diagnose vulvar cancer include:

Determining the extent of the cancer

Once your diagnosis is confirmed, your doctor works to determine the size and extent (stage) of your cancer. Staging tests can include:

The stages of vulvar cancer are indicated by Roman numerals that range from I to IV, with the lowest stage indicating cancer that is limited to the vulva. By stage IV, the cancer is considered advanced and has spread to nearby structures, such as the bladder or rectum, or to distant areas of the body.

Treatment options for vulvar cancer depend on the type, stage and location of your cancer, as well as your overall health and your preferences.

Surgery carries a risk of complications, such as infection and problems with healing around the incision. Removing lymph nodes can cause fluid retention and leg swelling, a condition called lymphedema.

Radiation therapy uses high-powered energy beams, such as X-rays and protons, to kill cancer cells. Radiation therapy for vulvar cancer is usually administered by a machine that moves around your body and directs radiation to precise points on your skin (external beam radiation).

Chemotherapy is a drug treatment that uses chemicals to kill cancer cells. Chemotherapy drugs are typically administered through a vein in your arm or by mouth.

For those with advanced vulvar cancer that has spread to other areas of the body, chemotherapy may be an option.

Targeted therapy might be an option for treating advanced vulvar cancer.

Immunotherapy might be an option for treating advanced vulvar cancer.

Because appointments can be brief, and it can be difficult to remember everything you want to discuss, it's a good idea to be prepared. Here are some suggestions for preparing, and what you can expect from your doctor.

Your time with your doctor is limited, so preparing a list of questions can help you make the most of your time together. List your questions from most important to least important in case time runs out. For vulvar cancer, some basic questions to ask include:

Your doctor will likely have a number of questions for you. Some questions your doctor might ask include: