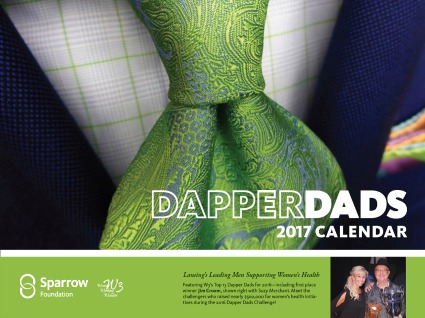 LANSING, MI – Thirteen of the region’s leading men are featured in the Dapper Dads 2017 calendar, a great holiday gift that benefits the health of women in mid-Michigan.

The calendar is available for purchase at SparrowFoundation.org/DapperDads.

The models were among dozens of leaders in business, sports and media who competed in the 7th Annual Dapper Dads Challenge & Fashion Show, hosted at Kositchek’s men’s clothing store earlier this year by the Sparrow Foundation and its committee, Women Working Wonders (W3).

Dapper Dads raised a record $456,000 for women’s health this year based on online donations for the models. The success of the event helped W3 fulfill its pledge of $1 million to the Sparrow Herbert-Herman Cancer Center that will open in 2017 across from Sparrow Hospital on Michigan Avenue in Lansing.

Those featured on the calendar were the top vote-getters. The “Top Dapper Dad” was Jackson National Life’s Jim Croom, who raised close to $73,000.

Since its inception, the popular annual event has raised more than $1.5 million in support of the physical and psychological health of women in mid-Michigan.

W3 is a Sparrow Foundation volunteer program that supports the health of women through community leadership, resource development, and outreach initiatives.