60-plus year volunteer honored for service at Sparrow 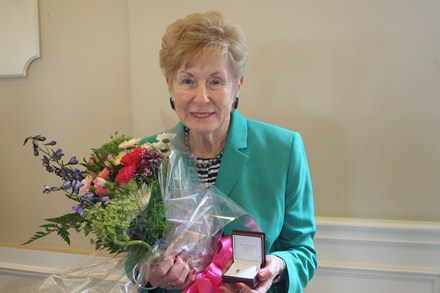 Adams, a Lansing native, has enriched many lives in the years since with her dedication and positive attitude as she has continued to volunteer at Sparrow. She received special recognition for 60-plus years of volunteering during the recent annual meeting of the Sparrow Women's Hospital Association.

"Christine is an incredible example of the selflessness and generosity of spirit of the many volunteers at Sparrow," said Tracy Feazel, Sparrow Volunteer Coordinator. "Her six decades of service to Sparrow and the community are amazing."

After the birth of her second child, Adams, 84, began volunteering at the suggestion of her mother, Beatrice, then a volunteer at St. Lawrence.

In 1957, Adams and a few other volunteers began carrying baskets of items to Patients' rooms. That led to organizing the Mary Magdalen League gift shop at the Sparrow St. Lawrence campus. Adams is a charter member and past president of the League and continues to work regular shifts at the shop.

The mother of three and grandmother of six (plus one great-grandchild) also served on the St. Lawrence Auxiliary Board and was formerly its president. She has been involved in numerous other community activities.