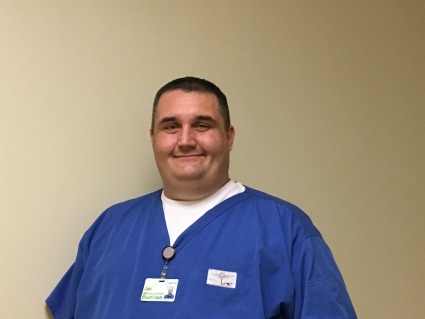 James “Jay” Lewis calls his desire to serve the “driving force” in his approach to his job as a Psychiatric Technician in Sparrow Hospital’s Behavioral Health Unit, at the St. Lawrence Campus. “The thing I like about my job,” Jay says, “is that it’s a unique opportunity to be compassionate, understanding and loving toward people who may not even love themselves.” In nominating Jay for the January Caregiver Spotlight Award, his supervisor, Laurie Beals, wrote: “Jay is a great person and relates well to his co-workers and Patients. He is a team player and always puts his Patients first. He is a strong advocate for his Patients and the population he works for … He is a wonderful asset to Behavioral Health and I hope he never leaves us. He demonstrates the ICARE values on a daily basis and represents Sparrow in a very positive way …” Colleague John Sturtevant added: “Jay is one of our exceptional Psychiatric Technicians who is always willing to go above and beyond. Jay typically works with Psychiatric Intensive Care Patients and is lovingly referred to as a gentle giant. His presence and demeanor put most Patients at ease and helps them feel safe during the behavioral crisis …” Another colleague, Piper Probst, wrote: “(Jay) provides a wealth of knowledge and expertise on how to safely care for Patients who are unwell and may act out as a result of their illness. He is a valuable member of the Behavioral Health and Education teams; we're fortunate to have him here at Sparrow.” Jay’s duties including assisting the nurses he works with, as well as working, one-on-one, with Patients who suffer from various mental illnesses, from depression to schizophrenia. “Safety is my number-one priority — making sure Patients are safe from themselves and that others are safe from them,” Jay says. Whenever possible, he employs a calming to help defuse tense situations. “Now and then we have to restrain someone,” he says, “but we absolutely try to avoid that.” Jay, who’s 38, grew up in Leslie, about 25 miles south of Lansing. He has worked for Sparrow for six years.