Chewy the puppy reunited with family after car crash 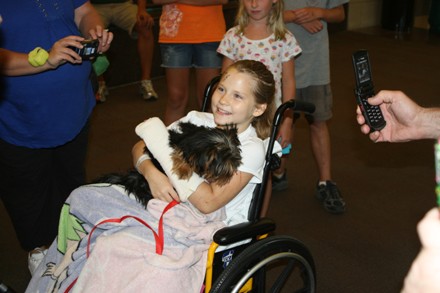 Sparrow Patient Hannah Achenbach, 10, thought she had lost her puppy Chewy forever in a car crash in Delta Township on Sunday.

Much to her surprise, she was reunited with the puppy in the Sparrow Hospital lobby Thursday night.

"Chewy!" she exclaimed when she saw her 4-month-old Pomeranian Yorkie puppy, who was clearly just as excited to see Hannah.

Hannah thought her dog had died in the crash, and the family had given up hope on finding him, said Hannah's grandmother, Judy Sabec of Muskegon.

"I didn't know, and we assumed there was no way he could survive ... but I just prayed," said Sabec.

When a Good Samaritan stopped by the Delta Township Fire Department Thursday morning to see if anyone had reported a lost dog, Jay Green just happened to be there and suspected it was Chewy. Green and Rachelle Feldpausch, both Delta Township firefighters and paramedics, treated Hannah in the ambulance after the crash and have visited her in the hospital this week.

"For all of them to survive, including the dog, you might as well win the lottery," said Green. Chewy was not injured.

"It's great that the Delta Township Fire Department was able to help locate and reunite Chewy with Hannah," said Dr. John Dery, DO, a Sparrow Emergency Department physician and MSU Emergency Medicine Residency program faculty member. "It's great when our hospital system can help the healing process along, especially when the family has had so much tragedy recently. I'm happy to be part of the team making things like that happen."

The surprise reunion is sure to lift Hannah and Kiara's spirits, which is a huge relief, said their father, Kyle Achenbach of Montague, Mich.

"I was just really happy," said Achenbach. "That was the first thing they were worried about. They didn't even care that they were hurt."