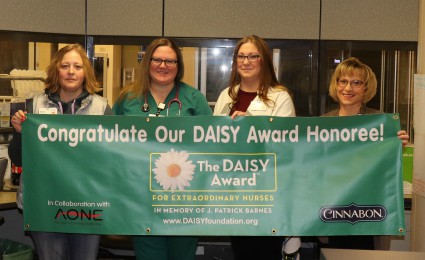 CARSON CITY, MI - Julie Noreen, RN, of the Sparrow Carson Hospital Emergency Department, has been recognized as the hospital's first DAISY Award winner of 2018, symbolizing extraordinary Nursing care. Noreen was nominated because of the compassion she showed to a critical Patient rushed to the Sparrow Carson Emergency Department along with several others after a tragic accident. That morning, Noreen and another Caregiver were the lead staff members and ensured extra Emergency staff were called to receive other critical Patients. Noreen comforted the Patient, a mother of seven who had several children involved in the accident. "At this young mother's time of need, Julie was an extraordinary person who not only helped save her life but also gave her hope," Noreen's nomination letter said. "There are so many extraordinary things that Nurses do to physically help Patients, [her] act of compassion and empathy is the heart and art of nursing." Congratulations to Noreen, who represents the extraordinary qualities that help Sparrow Carson Hospital provide quality, compassionate care to everyone, every time. The DAISY Foundation was established in 1999 by the family of J. Patrick Barnes who died of Idiopathic Thrombocytopenia (ITP) at age 33. DAISY is an acronym that stands for Diseases Attacking the Immune System. During Pat's eight-week hospitalization, his family was awestruck by the care and compassion his Nurses provided not only to Pat but to everyone in his family. The Foundation was created in Pat's memory to recognize extraordinary Nurses for the enormous difference they make in the lives of their Patients every day. Choose Wisely. Choose Sparrow. Photo caption: Celebrating Sparrow Carson Hospital's first DAISY Award of 2018 are Mary McClain, RN, Nurse Educator; Julie Noreen, RN, Emergency Department Nurse and winner of the DAISY Award; Sara Hagerman, RN, Emergency Department Manager; and Barb McQuillan, Sparrow Carson Hospital Chief Operating Officer and Chief Nursing Officer.