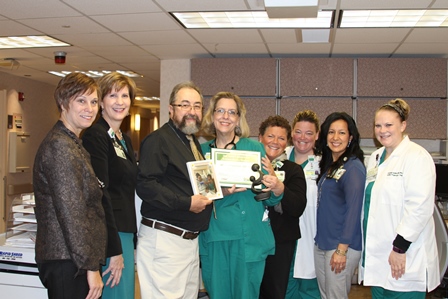 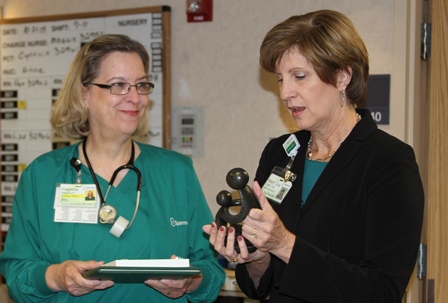 Recently, Blanchard noticed that an older sibling appeared to be feeling a little left out from the big event of a new baby sister’s birth. To help her feel more a part of the happy family milestone, Blanchard invited her to “help” in a routine check of mom’s vital signs. She even let big sister listen to the new baby’s heartbeat. By the end of the visit, the older sister declared it “the best day ever,” according to the proud grandfather. In fact, he was so touched by Blanchard’s actions that he wrote an open letter to hospital leaders to praise her holistic approach to care.

It is one of the many examples of Patient-centered care that led to Blanchard being named the October 2015 DAISY Award winner.

DAISY is an acronym for Diseases Attacking the Immune System, and the DAISY Award is a national program created in memory of J. Patrick Barnes died in 1999 of Idiopathic Thrombocytopenia Purpura, or ITP at 33 years old. His family was overwhelmed by the skillful and amazingly compassionate Nurses who cared for Pat, and the DAISY Foundation and Award were created as an expression of their gratitude.

Blanchard received a certificate, a DAISY pin to wear at work and beautiful serpentine stone sculpture carved by the artists of the Shona Tribe in Zimbabwe. The sculpture depicts the embracing relationship Nurses have with their Patients.

Congratulations to Patricia Blanchard, a Sparrow Nurse who proves that even the little things can make a big difference in providing quality, compassionate care to everyone, every time.