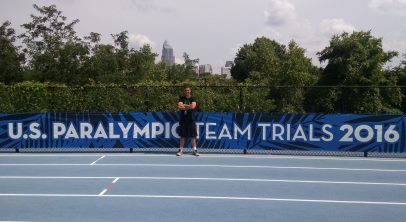 Justin Caine’s relationship with Sparrow began dramatically in September 1993 and led to him being a Miracle Child, a successful businessman, and Sparrow volunteer.

Now, the next chapter in his Sparrow-inspired story has been to become a nationally ranked athlete.

Justin, 33, set out on a rigorous regimen to train for a slot on the U.S. Paralympics Team and now owns the U.S. records for shot put and discus distance in his disability class.

In the end, he didn’t qualify for the team that heads to Rio de Janeiro in September, though he still holds out hope of getting added.

Regardless, Justin’s athletic success is a testament to the care he received at Sparrow.

Justin was 10 when he reached down to tie his shoe while driving to school in his father’s car and suddenly began vomiting. He reached for his head, called to his father, and passed out.

Sparrow surgeons spent more than seven hours removing a baseball-sized cancerous tumor from his cerebellum. He woke up from the surgery virtually dysfunctional, then spent five months at Sparrow, relearning the basic skills of survival – walking, talking, swallowing.

Justin’s journey was far from over but his recovery was so remarkable that he was named the Children’s Miracle Network Miracle Child, serving as the face of all kids helped by the Sparrow Children’s Center.

His connection to Sparrow remains strong – he and his firm, Good Fruit Video, work on projects for Sparrow and he donates his time to the Sparrow Foundation.

“Being a vendor and volunteer with the hospital that saved my life 23 years ago – that’s a very cool feeling,” he said.

In addition to his day job and volunteer work, for more than a year Justin trained six days a week, up to two hours a day for the Paralympics. Several days a week for 90 minutes at a time, he launched an 8.8-pound shot put over and over.

Drawing from the lessons of determination and perseverance that have served him so well, Justin is already setting new goals. He’s considering exploring a new athletic direction – swimming.

While training put a strain on family life with wife, Meaghan and two-year-old daughter, Felicity, their support remains solid.

When he told his wife he didn’t make the Paralympics team, she said, “It’s time to start training for Tokyo (site of the 2020 Olympics).”