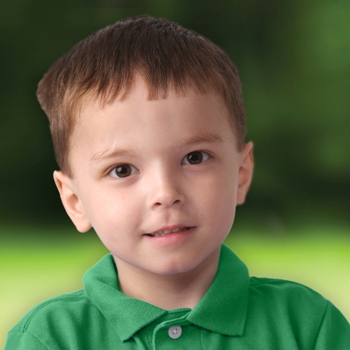 When the 4-year-old visits Sparrow Children's Center for chemotherapy, the Physicians and Caregivers cater to his every preference, down to the dinosaur stickers at the receptionist's desk.

As Sparrow's Miracle Child, Evan is featured in billboards, advertisements and during community events to promote the Sparrow Children's Center Telethon, which kicks off June 1.

Evan was diagnosed with leukemia in July 2010 and has undergone chemotherapy and more than a dozen hospitalizations since. He has about two more years of treatment to complete, but that doesn't appear to be slowing down the energetic and happy child.

"We could have gone anywhere in the world for his treatment, and we chose to stay here," said his dad Dr. Kent Yaney, DO, a Sparrow Emergency Department physician. "I don't think we did just as well as we could have anywhere else in the world, I think we did better because (Sparrow Caregivers) are so personal. They're so caring."

"The treatment for these children is long so it needs to happen close to home in their own environment," said Dr. Gera. "But this is only going to be possible with the community's support."