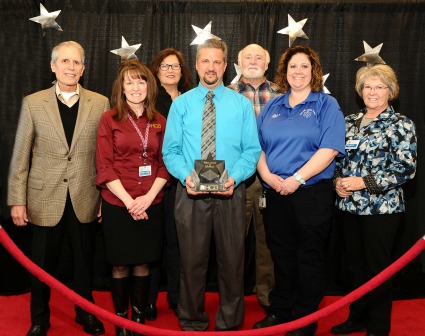 CHARLOTTE, Mich. – Three employees received Hayes Green Beach Memorial Hospital’s highest honors during the Fulton Awards of Excellence annual ceremony Wednesday, March 15. The award winners, recognized for their exceptional contributions to HGB’s success, are: • Holly Lafrance, EMS technician, received the clinical service award. • Deanna Cortright, registration specialist, received the non-clinical service award. • Chris Allen, R.N., Emergency Department nurse manager, received the leadership service award. Lafrance joined the Emergency Medical Services team in September 2003. She was nominated for the Fulton Award because of her leadership skills and caring instincts. Her department has experienced unprecedented growth and Lafrance helped ensure success by taking ownership of programs and operations; knowing what needed to be done before being asked. Her supervisor wrote, “I received a call from a woman who lived out of state and wanted to thank Holly for caring for her mother. Holly had noticed the patient had no phone or food. Holly went to Meijer and purchased food and got her a temporary cell phone until her daughter could travel to Michigan. I hadn’t even heard of this until that phone call. Holly is humble and receives gratification just knowing her job has been accomplished.” Cortright has worked in the Registration Department since August 2011. She received the Fulton Award because of her innovation and creativity, and because she is productive and dedicated. New employees are trained with Cortright first because she is both knowledgeable and patient. She understands the important role she plays as the “face of the hospital.” Her supervisor wrote on her nomination form, “Deanna dedicates herself to making a great first and lasting impression for patients, as well as visitors and family members. She looks for ways she can aid patients and coworkers, and she has a generous heart.” Allen has worked at HGB since May 1994, when he first joined the team as a paramedic. In 2011 he became a registered nurse. He was promoted to house supervisor in 2012, before moving to his current role the next year. Allen was nominated for the Fulton leadership award because he has been directly involved in processes to improve performance and efficiency, and enhance the patient experience. His actions have resulted in greater collaboration, increased patient satisfaction and positive teamwork. “Chris is a great ambassador for HGB. We have seen success because of his coaching, encouragement, teamwork and positive attitude. He believes in our mission and supports our CARES values,” wrote Allen’s supervisor. Dozens of HGB employees are nominated each year for the Fulton Awards by peers, supervisors and patients. The award is based on: 1. Consistent and outstanding customer service skills; 2. Innovation and creativity at work; and 3. Willingness to go beyond the call of duty. The Fulton Award is named in honor of Robert Fulton for his many contributions as a member of the hospital’s board of trustees. Mr. Fulton was well known for helping bring to reality HGB’s dream of offering quality, local care. He took great pride in the annual award ceremony – not because it was named after him, but because he wanted to honor the nominees and recipients and the “excellence radiating through HGB.” Hayes Green Beach Memorial Hospital has been the community’s choice for health care for more than 80 years. HGB is committed to working together in health to provide quality care and enhance the vitality of the community. Learn more about HGB at www.hgbhealth.com.