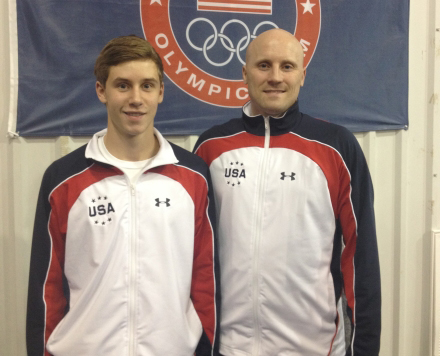 Dr. Vance coaches trampoline at his gym in Wyoming, Mich., and will accompany his student, Mitch Dewey, to Sofia, Bulgaria, next week for the 2013 World Trampoline and Tumbling Competition. Dewey is a junior at Forest Hills High School and is the USA's top seed in his event.

"It's a very humbling experience to watch one of your students grow and succeed," Dr. Vance said. "I was fortunate enough to compete on a global scale and now to see Mitch do it just gives me a sense of pride."

Dr. Vance took up the trampoline in 1993 when he was 14. Since then, he has been a member of the USA Gymnastics Nationals team and placed 9th in the World Championships in the Netherlands in 2005. He was also part of the team that won the silver medal at the 2007 World Championships.

"It's always exciting to compete and see your hard work rewarded," he added. "Mitch has been competing for years and his dedication and commitment to the sport is inspiring."

Dr. Vance and his wife, Alisa, have owned For The Kidz Gymnastics and Trampoline in Wyoming since 2005. He began his residency at Sparrow in 2007 and has been an Attending Physician in Sparrow Ionia's Emergency Department since 2010.

Dr. Vance and Dewey will leave for Bulgaria on Sunday, with the competition beginning Wednesday, Nov. 13.