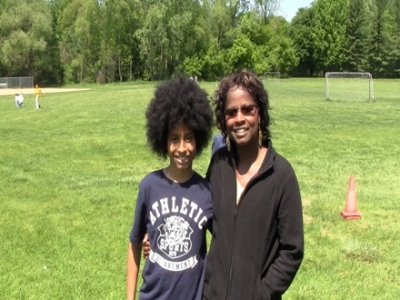 The first time Hunter Kehler, 11, of Lansing ran the Kohl's Michigan Mile, it was much more than a race for him and his family.

His mom, Judy Kehler, completed the run with him in 2007 as she marked the successful completion of her breast cancer treatment.

"I chose to do the Michigan Mile in 2007 because it was something my son was doing," said Judy. "We did the mile together and it was kind of like a victory lap."

For Judy, the Michigan Mile is a great opportunity for her son and other children to get active.

The event is the capstone for the Feelin' Good Mileage Club, an activity Hunter has been participating in since kindergarten. The 5th grader at Whitehills Elementary School in East Lansing has already walked 22 miles this year, and said he feels good and has more endurance because of it.

Thousands of children like Hunter will participate in this year's Kohl's Michigan Mile presented on Saturday, June 2 at Cooley Law School Stadium, home of the Lansing Lugnuts.

Sponsored by Kohl's Cares and Sparrow, the fun and non-competitive event includes a one-mile course for children 13 and younger and a shorter course (the KIDSPRINT) inside the stadium for those 6 and under.

Early registration is $7 until May 18. After that, the cost is $10 until the day of the event. Those interested may register at sparrow.org/michiganmile.

The Feelin' Good Mileage Club rewards elementary school students for walking and running at school. Nearly 18,000 PK-6 students from eight counties are participating in the 2012 program.