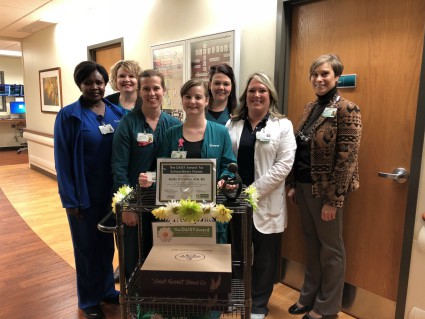 Kristin had an elderly gentleman as a patient that was not expecting to be admitted, and definitely not expecting to be at the hospital for more than one day. He is the caretaker for his wife who needs help at home with her medications and daily activities. They do not have family in the area and he was very concerned about what would happen to his wife while he was an inpatient. Kristin called the case manager who provided a list of in-home aide services. Realizing that this was not a service that would likely be set up in the timeframe this couple needed, Kristin reached out to her fellow Caregivers for help. Shelby Royston remembered hearing a commercial for Guardian Angels, a service that helps in situations such as this. They called and had the company speak with the husband, the company then arranged for neighbors of the couple to check on the wife and make sure her needs were met. When I rounded on this patient, he was so moved by the care he received from Kristin. He could not believe she went out of her way to help him ensure his wife was safe and taken care of