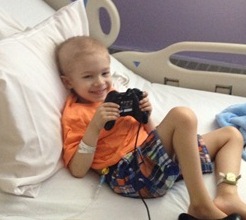 Local gamers will participate in a day-long marathon this weekend to help raise money for the Sparrow Children’s Center, the region’s only Children’s Miracle Network Hospital.

Some gamers will be playing to support 4-year-old Elijah Bajema of Holt. He had a Wilms tumor, one of the most common forms of kidney cancer among children. He is still undergoing treatment and remains strong. While at Sparrow, Bajema is an Xbox enthusiast but prefers to play his PlayStation at home.

The gaming marathon at Michigan State University, 25 hours long due to daylight saving time, is part of an annual Extra Life online event. Extra Life was founded in 2008 to honor the memory of a CMN Hospital Patient in Texas. It has grown to be a large charitable effort in the video game world and drives awareness and donations for CMN Hospitals throughout the U.S. and Canada.

The MSU marathon will be held at the MSU Pavilion, 4301 Farm Lane, East Lansing. It begins Saturday, Nov. 1, at 10 a.m. and lasts until 10 a.m. on Sunday, Nov. 2. You must bring your own gaming equipment and video games.

People interested in helping the cause and playing in the gaming marathon can register for free at extra-life.org/team/MSUEL. For more information, email MSUExtraLife@gmail.com. You can also sign up individually at extra-life.org and play from home on your own.

Last year, gamers played in honor of Bradley “Jay” Ford, of Perry, who died from leukemia at age 21. Ford was an avid gamer and donated video games, an Xbox 360, and PlayStation 3 to the Sparrow Children’s Center. Family and friends were even asked to donate games and money to Sparrow in lieu of flowers at his funeral.

Donations are tax-deductible and all of the money raised goes directly to the Sparrow Children’s Center and the Sparrow Foundation.