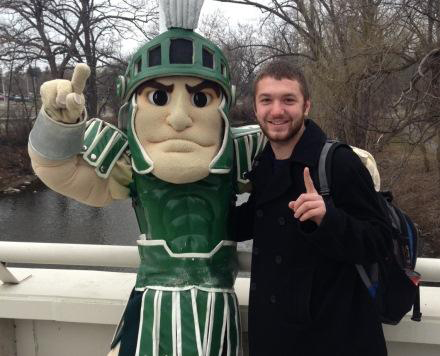 LANSING, Mich. - At 22 years old, Trevor Thompson of Owosso never thought about having a stroke. But thanks to the quick thinking of his roommate and the stroke team at Sparrow, Thompson is back in class at Michigan State University as if nothing had ever happened.

"I began to stumble as I walked through my apartment and I was slurring my speech," Thompson said. "I tried to wash my face and get ready for class, but I couldn't do it."

Thompson's roommates were worried. They started to search his symptoms on the computer.

"Stroke was the last thing on our minds, but just to be safe, one of my roommates called my dad and then drove me to Sparrow's Emergency Department," Thompson said.

Thompson was suffering a basilar artery stroke - a blood clot in the left side of his brain. He had lost the ability to control the right side of his body.

"Our first form of treatment is a clot-busting drug called tPa," said Dr. Syed Hussain, M.D., Medical Director of Stroke Services at Sparrow and an MSU HealthTeam neurologist. "But that didn't work on Trevor and we immediately had to attempt to remove the clot manually."

Thanks to the care of the well-trained specialists at the Sparrow Stroke Center, Thompson has made nearly a full recovery.

"I can't thank the team at Sparrow enough for saving my life," Thompson said. "At 22, I never thought I'd be at risk for a stroke. Luckily, I was able to get to Sparrow quickly enough. I'm back to being a healthy 22-year-old working his way through school."

The Sparrow Stroke Center is Michigan's first and only Joint Commission-certified Comprehensive Stroke Center. It has been nationally recognized for excellent service for nearly a decade, earning numerous awards such as the distinction of a Gold Plus Performer by the American Stroke Association. The Center also is ranked among the nation's fastest for the delivery of powerful stroke-stopping treatments, making it one of America's best hospitals for stroke treatment.