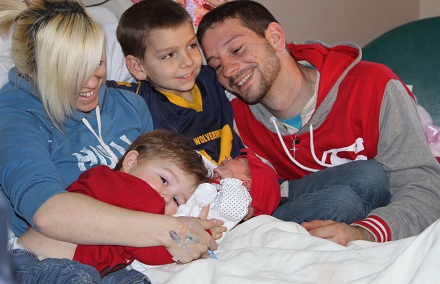 Sparrow's 2013 New Year's Baby wasn't expected to arrive until the middle of January, but Charlee Marie Sherwood decided to come early at 12:06 a.m. this morning.

"We never thought this would happen. She wasn't due until the middle of January. And then, once labor started it looked like she was going to come before midnight," said mom Ashley Sherwood.

Older brother Skyler was excited too, noting how soft her cheeks were and declaring she was "Good Luck Charlee" - clearly a fan of the popular Disney Channel show by a similar name.

Parents Ashley and Patrick Sherwood of Mason received an infant car seat along with a teddy bear and other gifts from Sparrow in honor of the event.