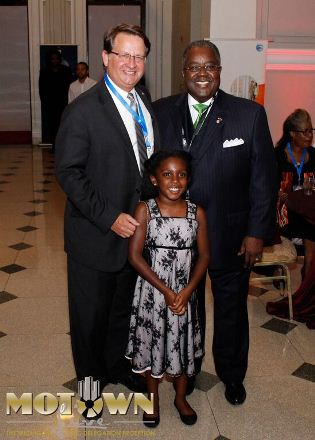 Sparrow Physicians Health Plan Board Chair James Butler III (U.S. Army –Retired) has received the prestigious Courage and Valor Award for Distinguished Military Service from the Michigan Congressional Black Caucus Delegation for service to his country during the Vietnam War.

Butler was recognized at the 2015 Michigan CBC Delegation Reception in Washington, D.C.

Butler, a decorated Vietnam War veteran, served as a Platoon Sergeant in the U.S. Army and earned many honors, including the Combat Infantry Badge, Army Commendation Medal, two Purple Hearts and four Bronze Stars, in recognition of heroism in ground combat.

Butler exhibited true bravery in his selfless service leading his soldiers in Vietnam.

“I am honored, but most of all humbled to have received this award,” said Butler. “Many men and women courageously serve our country and receive no recognition. I am deeply grateful. It was heartwarming to have the support and presence of so many Congressional members. It was a wonderful evening and a premier event.”

As a civilian, Butler had a 30-year career with IBM and earned many community and business awards. He formerly chaired the Sparrow Health System Board of Directors and helped spearhead the Sparrow Medical Group VOA practice, which serves the area’s homeless. It is believed to be first practice in Michigan based in a homeless service center.

The Michigan CBC Delegation Reception provides an important opportunity to acknowledge the work being done by Michigan’s Congressional Delegation as well as recognize deserving individuals and businesses who enhance the quality of life for Michigan residents.