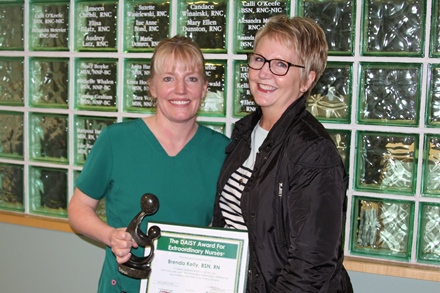 When the mother of a baby born with numerous life-threatening conditions needed compassion, understanding and someone who spoke and understood Spanish, Brenda Kelly, BSN, RN, was there.

When the infant passed away, Kelly, a Nurse in Sparrow’s Regional Neonatal Intensive Care Unit or RNICU, eloquently wrote of the family’s gratitude so other Caregivers knew how much their radical, loving care meant.

“Brenda comforted the mother who had only been in the country for a few months and who spoke very little English,” said Ellen Parrott, RN, fellow RNICU Caregiver who nominated Kelly for the DAISY Award. “I’m sure she heard not just words she could understand, but that she also felt compassion when they spoke.”

Kelly has been presented with the DAISY Award to honor her actions, going above and beyond to put the needs of her young Patients first.

Kelly received a certificate, a DAISY pin to wear at work and beautiful serpentine stone sculpture carved by the artists of the Shona Tribe in Zimbabwe. The sculpture depicts the embracing relationship Nurses have with their Patients.