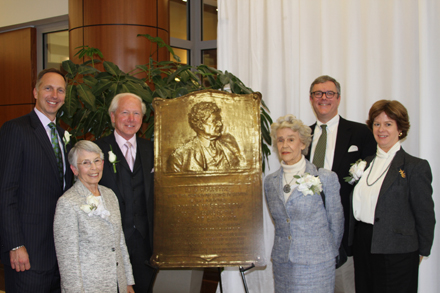 Joined by members of Sparrow's family, Helen and Robert Roosevelt and Katherine Sparrow of New York City, the Sparrow Hospital Women's Association, key leaders, and community officials reflected on the significance of the donation. Edward W. Sparrow's gesture launched Sparrow Hospital's mission from the very beginning to improve the health of the people in our communities.

Over the years, the community helped to build, grow, staff and supply the hospital, becoming mid-Michigan's premier health care organization and the region's largest private employer. Sparrow was never publicly thanked in his time, so on this historic milestone the health system recognizes "The Gift. The Giver. The Legacy."

"Edward W. Sparrow's gifts have allowed us to be an essential contributor to the quality of life in mid-Michigan. We pledge to honor him and his family by protecting his legacy and tirelessly working to meet our Patients' health care needs and expectations for the next 100 years," said Dennis Swan, Sparrow President & CEO.

Sparrow, an Irish immigrant, settled in Lansing in 1858, and quickly grew to be a successful businessman, real estate owner, and lumber magnate. Sparrow's philanthropy and desire to contribute to the betterment of his community not only involved Sparrow Hospital, but also many other notable Lansing landmarks, such as the Olds Motor Vehicle Company, the Lansing Improvement Association (the forerunner of the Greater Lansing Chamber of Commerce), and City National Bank, more recently known as Michigan National Bank.