Working side by side with local firefighters and EMTs, Fowler High School freshmen trained by Sparrow Caregivers in cardiopulmonary resuscitation recently put their training to the test in an emergency CPR drill at the high school.

When it was over, Angela Hufnagel, an Emergency Department Nurse at Sparrow Clinton Hospital who provided the training in March, and fellow Sparrow Clinton ER Nurse Samantha Weber rated the students’ performance.

“You did a very good job,” Hufnagel told them.

The drill was a cooperative effort of Sparrow, the American Heart Association and Fowler High School. It began when students walked into the school gym during a class change and found a mannequin on the floor - a victim of a simulated cardiac arrest suffered in a basketball game.

The students swung into action as a team - dialing 911, applying chest compression, retrieving and operating the school’s automated external defibrillator (AED). Meanwhile the 911 call, including the dispatcher’s response, was broadcast on the gym’s public-address system.

Once the professional first-responders arrived on the scene, the students followed instructions and helped out.

“We started this program five years ago,” said Hufnagel, a graduate of Fowler High School. “The adults at the school have been trained in CPR, but I got to thinking about what would happen if a teacher went down in a classroom. I wanted to show the students how they could potentially save a life. The drill gave them a chance to practice what they learned.”

Hufnagel’s work reflects Sparrow’s mission to improve the health of the people of our region.

For one student trained by Hufnagel, the potential to save a life with CPR became a reality. In March 2015, just three weeks after receiving the training, 15-year-old Dane Armbrustmacher used CPR to save the life of his 3-year-old brother, Dakota, who stopped breathing during a seizure.

According to the American Heart Association, every year about 157,000 people suffer cardiac arrest outside of a hospital and only 8 percent survive. CPR applied prior to the arrival of EMTs can nearly triple the survival rate.

Heart Association officials pointed out that if all Michigan high schools followed Fowler’s lead and taught students basic CPR prior to graduation, the state would gain 100,000 more lifesavers each year. Twenty-eight states already have passed laws to ensure that students get CPR training.

Said Hufnagel, “It’s a simple lifesaving technique anybody can learn.” 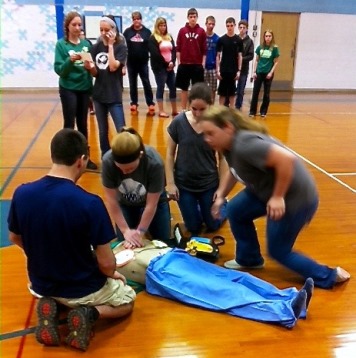