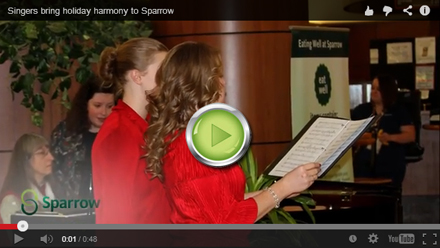 Members of the Octet group from Heritage Baptist Church in DeWitt performed in the lobby of Sparrow Hospital Wednesday night for passing Patients, Visitors and Caregivers.

The group, made up of teens and young adults, sang for nearly an hour and brought smiles to hearts and minds for many passersby.

Stephen Smith, who sings along with his sister Charis, is a Sparrow Volunteer - something he was inspired to do after spending so much time here as his brother Andrew battled but ultimately lost his fight against cancer.

Another member of the group, Abby Sherwin, recently completed worked with Sparrow nutritionists as part of her schooling.

Our thanks go out to Charis Smith, Katherine Cole, Abby Sherwin, Tabitha René, David Skutt, Garrett Spooner, Peter René, Stephen Smith, and accompanist Debbie Cole. Your music was beautiful and we're so appreciative of the joy you brought to our Sparrow community.