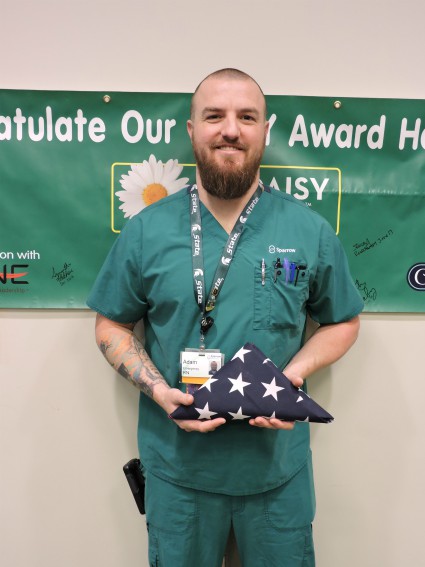 IONIA, MI – A Sparrow Ionia Hospital Nurse formed a touching bond with a military veteran during the man’s final days and has now been honored with a DAISY Award for extraordinary Nurses.

The DAISY Award is an international program that rewards and celebrates the compassionate and skillful care given by Nurses every day.

Adam Dobbrastine, a Sparrow Ionia Emergency Department Nurse and military veteran himself, visited Michael Welsh, 69, to cheer him up after Relsh thought no one cared anymore about his military service. Welsh was a Patient at the time at Sparrow Ionia after being diagnosed with liver cancer.

The pair talked, prayed and cried together, making an indelible impression on Welsh and his family.

“My dad called me crying and told me what happened. Adam is a true angel,” said Kim Johnson, one of Welsh’s daughters.

“He’s an amazing person. He’s so caring. I’ve never seen anybody like him before.”

In a letter nominating Dobbrastine for the DAISY Award, Becky Lake, another daughter, said, “When good people go out of their way to help someone or comfort them it makes the world a better place. Adam made my dad have a better day when he was down and that is a beautiful thing.”

Welsh died several weeks after his visit from Dobbrastine. Dobbrastine was given the DAISY Award in a surprise ceremony and, in a touching moment, Welsh’s daughters gave him their father’s American flag.

DAISY is an acronym for Diseases Attacking the Immune System. The DAISY Award is a national program created in memory of J. Patrick Barnes who died in 1999 of Idiopathic Thrombocytopenia Purpura, or ITP, at age 33. His family was overwhelmed by the skillful and compassionate Nurses who cared for him, and the DAISY Foundation and Award were created as an expression of their gratitude.

Dobbrastine received a certificate, a DAISY pin, a beautiful stone sculpture called A Healer’s Touch, hand-carved by artists of the Shona Tribe in Zimbabwe. The sculpture depicts the embracing relationship Nurses have with their Patients.