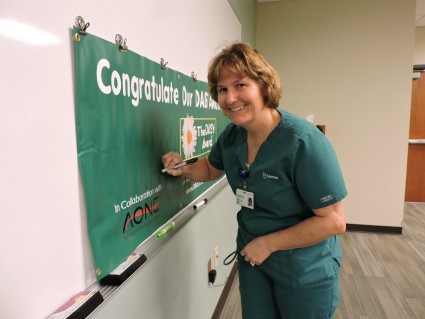 IONIA, MI – Sparrow Ionia Hospital has honored Medical/Surgical Nurse Tammy Krausz, RN, with a DAISY Award for extraordinary Nurses in recognition of her Patient-centered approach to care.
The DAISY Award is an international program that rewards and celebrates the compassionate and skillful care given by Nurses every day.

Krausz, who was presented the award in a recent ceremony, was nominated by several Patients and their families for the exceptional care and comfort she provided during recent hospital stays.

“She’s extraordinary! Everything she does is caring, professional, and thoughtful. I would recommend this hospital any day,” said a nomination from Robert and Marg Kelly.

Another nomination, from former Patient Ryan Flaherty, said Krausz took the time to get to know he and his family, so much so that his toddler son would ask for her by name.

“It was apparent from the onset that at her core Tammy is a Caregiver and a very compassionate individual,” Flaherty’s nomination said.

Said another nomination: “Tammy is the best Nurse I have ever had.”

Krausz has been a Nurse for about 20 years, having worked at Sparrow Ionia for two.

DAISY is an acronym for Diseases Attacking the Immune System. The DAISY Award is a national program created in memory of J. Patrick Barnes who died in 1999 of Idiopathic Thrombocytopenia Purpura, or ITP, at age 33. His family was overwhelmed by the skillful and compassionate Nurses who cared for him, and the DAISY Foundation and Award were created as an expression of their gratitude.

Krausz received a certificate, a DAISY pin, a beautiful stone sculpture called A Healer’s Touch, hand-carved by artists of the Shona Tribe in Zimbabwe. The sculpture depicts the embracing relationship Nurses have with their Patients.